Besides Hamas, Palestinian factions at the Damascus meeting included Islamic Jihad, al-Nidal, the Popular Front for the Liberation of Palestine (PFLP) and al-Saeqa.

The Israel military said on Sunday that troops withdrawals had begun from key positions in and around Gaza City.

However, Israel earlier said that it will not consider a timetable for withdrawing all of its forces from the Gaza Strip until Hamas and other groups halt their fire.

Speaking to Al Jazeera on Sunday, Avital Leibovich, an Israeli military spokesperson, said: “I am sorry, Hamas will not give Israel a deadline to pull out its troops.

“We will pull out the troops if and when we will decide that a permanent safe and secure situation has arrived in our country – which has not [yet]. Since from the morning we were targeted by 16 rockets from Hamas.

“We have to assess the situation every day and then see whether we are heading towards a stable secure situation or [if] we have to continue the operation.

“The operation is not over. This is only a holding of fire.”

Palestinian factions have continued to fire rockets into southern Israel since the beginning of the offensive, killing three Israelis, out of a total of 13 Israelis that have died since the begining of the war.

They have also been fighting Israel’s ground forces which enterd the Gaza Strip in the second week of the offensive.

An end to rocket fire from the Gaza Strip into Israel was the stated aim of the Israeli offensive.

Israel declared a unilateral ceasefire on Saturday, with Ehud Olmert, the prime minister, stating that the country had achieved its objectives.

“We have reached all the goals of the war, and beyond,” he said. “[But] if our enemies decide to strike and want to carry on, then the Israeli army will regard itself as free to respond with force.”

Olmert also said the war boosted Israel’s deterrence and that Hamas’s actions would decide when the military would withdraw.

“This operation strengthened the deterrence of the state of Israel in the face of all those who threaten us,” he said.

“If Hamas completely stops its attacks, we will judge at what moment we will leave the Gaza Strip.”

However, Ayman Mohyeldin, Al Jazeera’s correspondent in Gaza City, said some in the Gaza Strip are claiming a victory for Hamas and other Palestinian factions.

“On an operational level on the last day of the war and even after the war Palestinian factions are still capable of firing rockets, no doubt about that.

“In fact, more than a dozen or so have been fired today according to the factions here on the ground.

“On a symbolic level, at the end of the day the Palestinian people remain here on the ground, having paid a very heavy price though.

“Their position was one of steadfast defiance. The fact that they can stay and essentially … claim that they have been able to stave off this aggression, in terms of the leadership and the command and control structure of Hamas and the government here, is certainly a sign for many here that they have been victorious.”

At least 16 rockets were fired from the Gaza Strip into Israel on Sunday morning after it declared its ceasefire.

Israel responded with air attacks, according to Israeli sources.

Barnaby Phillips, Al Jazeera’s correspondent, reporting from near the Gaza-Israel border, said that the situation is extremely fragile.

“This ceasefire … could go horribly wrong at any moment. There are thousands of troops in Gaza. We did see some withdraw we think this morning, we are not sure of numbers but they are in close proximity to Hamas fighters,” he said. 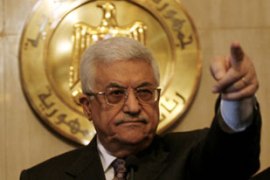 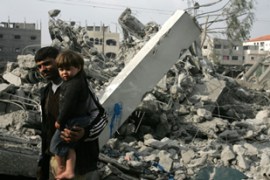 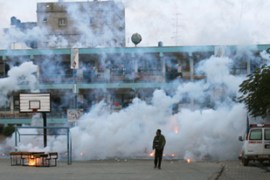 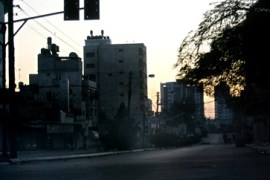