Olmert said Israel had achieved its objectives for the Gaza war.

“We have reached all the goals of the war, and beyond,” he said. “[But] if our enemies decide to strike and want to carry on, then the Israeli army will regard itself as free to respond with force.”

Olmert also said the war boosted Israel’s deterrence and that Hamas’s actions would decide when the military would withdraw.

“This operation strengthened the deterrence of the state of Israel in the face of all those who threaten us,” he said.

“If Hamas completely stops its attacks, we will judge at what moment we will leave the Gaza Strip.”

Despite Israel’s self-declared ceasefire, Hamas officials said they would not stop fighting until Israeli troops withdrew.

“If the Israeli military continues its existence in the Gaza Strip, that is a wide door for the resistance against the occupation forces,” Osama Hamdan, a Hamas official in Lebanon told Al Jazeera.

Fawzi Barhoum, a Hamas spokesman in the Gaza Strip, said: “The Zionist enemy must stop all its aggression, completely withdraw from the Gaza Strip, lift the blockade, and open the crossings. We will not accept the presence of a single soldier in Gaza.

“The enemy’s declaration of a unilateral ceasefire confirms that this is a unilateral war launched in one direction, from the enemy upon our people.”

Other Palestinian armed groups in the Gaza Strip, which like Hamas’s military wing have fired rockets at Israel, rejected Israel’s ceasefire.

Islamic Jihad said in a statement that “the resistance will continue its battle as long as occupation forces are on the land of Gaza and as long as the siege and the blockade continue”.

Abu Youssef Said, a spokesman for the Popular Resistance Committees, said: “A unilateral ceasefire is nothing to do with us … and we will continue to bear arms.”

Alan Fisher, Al Jazeera’s correspondent on the Gaza-Israel border, said: “What the Israelis are doing by this unilateral declaration is taking all the power into their own hands and they will almost dictate now what happens, and when.

“Israel could almost go it alone now because of the role Egypt is playing in talking to Hamas and this deal, as Israel sees it, isn’t with Hamas – it is something they are doing on their own.”

Analysts were sceptical that the halt in fighting would have much success as a unilateral measure.

Dr Azzam Tamimi, from the Institute of Islamic Political Thought in London, told Al Jazeera: “After the Israelis have managed to kill as many of the children and women of Gaza I doubt that people of Gaza will believe them. Ehud Olmert is a compulsive liar.

“The main objective of this operation right from the start was to turn the people of Gaza against Hamas and pave the way for Mahmoud Abbas [the Palestinian president] to return to Gaza. That is why the civilians were deliberately attacked and their lives shattered.

“This objective has failed, it hasn’t been achieved and now Israel is declaring a unilateral truce. It is a defeat for the real objectives of this operation,” Tamimi said.

At least 1,203 Gazans have been killed in Gaza since the offensive began, according to UN and Palestinian medical sources.

At least 13 Israelis have died, three of them civilians.

Israel decided on a unilateral ceasefire in preference to entering into an Egyptian-brokered ceasefire with Hamas, which rules the Gaza Strip, analysts said.

The unilateral truce allows Israel to avoid agreeing concessions with the Palestinian group, such as easing the 18-month-old blockade of the Gaza Strip, which has prevented medical aid and basic supplies from reaching the Palestinians.

Israel’s stated aim of the war, which it dubbed Operation Cast Lead, has been to reduce Palestinian rocket attacks on southern Israel. 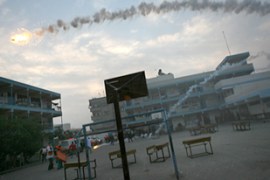 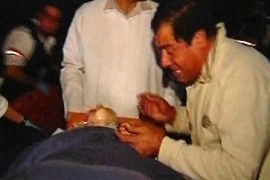 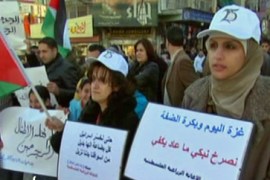 The Gaza war led to more people in the West Bank criticising their leaders. 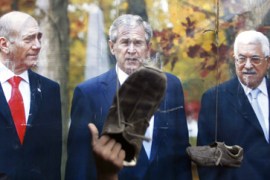 Can Abbas survive after Gaza war?

Analyst Mouin Rabbani discusses the possible repercussions of a ceasefire.