Turnout was estimated at 60 per cent and the Election Commission will certify and announce the official results within one month.

The by-election was seen as a test for Abhisit – elected by members of parliament as prime minister by a thin majority last month – and for Thaksin allies who were forced from power by a December court ruling.

The weekend polls were to fill the vacancies left by 29 MPs banned by the same ruling, which dissolved the previous People Power party-led (PPP) administration on charges of vote fraud.

Of the 29 seats up for grabs over the weekend, 13 had been held by the now-defunct PPP – which has regrouped in the opposition as the Puea Thai party – and 16 were held by its then-allies in the Chart Thai party, which was also disbanded.

Bangkok residents also voted on Sunday for a new governor, with the Suan Dusit university exit poll showing Sukhumbhand Paribatra, a Democrat candidate, in a comfortable lead after winning nearly 47 per cent of the vote.

General Wichian Potphosri, the deputy national police chief, said more than 34,000 policemen had been deployed at polling stations for the by-elections, with the army and navy helping out in some provinces.

Meanwhile, the new government has vowed to invoke controversial les majeste laws protecting the Thai monarchy in a crackdown on unprecedented levels of criticism of the palace following months of sometimes-violent demonstrations by anti-government protesters claiming to defend the king.

The protests against the PPP and Thaksin peaked with the crippling week-long occupation of Bangkok’s two airports in late November before the PPP was forced from power.

Last week Pirapan Salirathavibhaga, the new justice minister and a former judge, said the monarchy was not just a symbolic institution but a “pillar of national security” and must be protected.

Among those targeted has been Giles Ji Ungpakorn, a political science lecturer at Chulalongkorn University and a commentator, who has been summoned by police for questioning on allegations of les majeste.

Giles has written several academic articles on the monarchy. 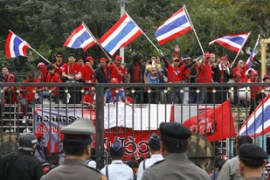 Thai protesters vow to fight on

Thaksin supporters say they will continue protests until elections are called. 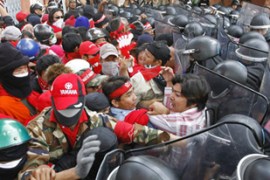 PM switches venue of a key policy speech to avoid clashing with protesters. 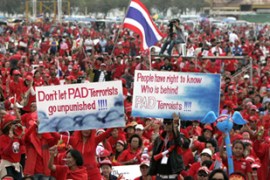 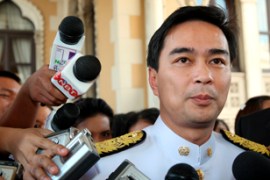 Critics say some appointments will make it harder to unite deeply divided nation.