“We are obliged to consider the document signed as null and void.”

Jose Manuel Barroso, the European Commission president, and Mirek Topolanek, the Czech prime minister, who negotiated the accord on behalf of the EU presidency, had expected Russia to resume supplies immediately.

Central Europe and the Balkans suffered for a sixth consecutive day from the abrupt cut-off of Russian natural gas supplies that has left homes without heat and idled factories and schools.

“Moscow is clearly taking no prisoners and has gambled its image as a reliable supplier … to get the best economic and political benefits,” commented the Russian daily Vremya Novostei.

The dispute between ex-Soviet giants Russia and Ukraine over gas payments and prices has raised urgent questions about the reliability of supply from Russia, which the EU relies on for a quarter of its total gas consumption.

EU energy ministers were to hold an emergency meeting in Brussels later on Monday to discuss ways to resolve the crisis and “increasing European energy security”, Martin Riman, the Czech industry minister, said.

Medvedev and other senior Russian officials including Vladimir Putin, the prime minister, charged that Ukraine had added phrases to the accord after it had been signed by Russia and the EU.

Putin telephoned Barroso on Sunday and informed him that the modifications introduced by Ukraine were “unacceptable” to Russia and then told Topolanek that Kiev should sign the deal again “without any additions or notes”.

Ferran Tarradellas, the European Commission spokesman, said later that Kiev had agreed to re-sign the paperwork, although there was no confirmation from Ukraine.

The agreement in question laid out terms for international monitors to check the flow of natural gas transiting through pipelines in Ukraine that account for the bulk of Russia’s exports to customers in Europe.

Valentyn Zemlyansky, spokesman for Ukraine’s national gas company Naftogaz, was quoted by Interfax-Ukraine as saying that Kiev was still ready to resume transit of Russian gas to Europe.

“We confirm all prior guarantees on resuming transit and on having it monitored by independent observers,” he said. 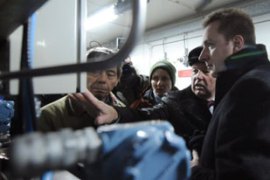 Agreement to restore supplies to Europe in doubt after row over Ukrainian amendments. 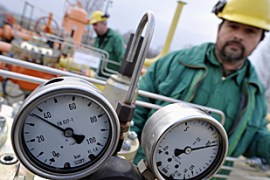 Czech minister says supplies can resume Sunday if everyone works at 100 per cent.