Her preferred coalition party, the Free Democrats, had 14.5 per cent, the exit poll indicated.

Together, their total narrowly exceeds that of the other three main parties combined, putting Merkel on track for a second term.

“In all likelihood we’re going to see the end of the ‘grand coalition’ … if these exit polls are correct,” Barnaby Phillips, Al Jazeera’s correspondent, reporting from Germany, said.

“Her [Merkel’s] own CDU party have performed moderately well, but it seems that the more free market liberals [the Free Democrats] have done well … so at CDU headquarters, people are pretty happy.”

Merkel has made no secret she is keen to end her current, awkward “grand coalition” with the rival Social Democrats (SPD), in place since the elections of 2005, in favour of the Free Democrats.

The SPD stood at 23.5 per cent, according to the exit poll, their lowest score in the post-war era.

Soon after the exit polls came out, Frank-Walter Steinmeier, the SPD challenger to Merkel, conceded defeat.

Thomas Kielinger, a correspondent for the German daily newspaper Die Welt, said that the end of the “grand coalition” would be a good thing for German democracy.

“Political life will now become far more interesting in the next four years than it has been in the last four,” he told Al Jazeera.

“We’ll have a proper opposition now … and we’ll have a bit of a tug-of-war inside the coalition where the Free Democrats – more pro-market than Mrs Merkel’s party – will want to pull her more into capitalist, pro-business stance which will give her pause and might make her unpopular with large sections of German society.”

Exit projections showed the environmentalist Greens won just over 10 per cent of the vote and the far-left “Linke” or Left party won close to 13 per cent.

Projections of voter turnout in the elections were about 70 per cent, below average for Germany.

“That partly reflects the fact that it wasn’t the most passionate of campaigns, that enough Germans felt relatively pleased with the direction that their country was going in and that it was hard to discern dramatic policy differences between the parties during the campaign,” Al Jazeera’s correspondent reported.

In foreign policy, a centre-right coalition could be more vocal in trying to block Turkey’s bid to join the European Union. Merkel favours a “privileged partnership” for Ankara that stops short of full membership.

But foreign policy issues were not top of voters’ lists going into the election.

The vote instead came at a crucial time domestically for Europe’s largest economy, which is just emerging from its deepest recession of the post-war era.

The next government will have to get a surging budget deficit under control, and cope with rising unemployment and the threat of a credit crunch as Germany’s fragile banks pull back their lending. 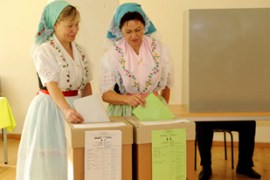