“During the procession, mourners started firing shots up into the air – as is tradition to show their defiance, their protest and anger.

“Israeli forces on the border saw that as an act of aggression and started firing,” she said.

The incident is also the first time guns have been fired during a protest since the end of Israel’s offensive on Gaza at in January that killed more than 1,300 Palestinians.

The brandishing of weapons in Gaza City was a rare show of force by the Islamic Jihad movement, and came despite strict rules against the public display of weapons enforced by Hamas.

The group banned the bearing of weapons in public after it seized power in Gaza in June 2007.

“We call on all Palestinian resistance factions to resume martyrdom operations inside the Zionist entity,” one protest leader at the funeral yelled through a megaphone, referring to suicide bombings.

The funeral was for fighters from Islamic Jihad, killed on Friday evening by Israeli aircraft in a strike that severely wounded three other people.

The three men killed in the Israeli air raid were travelling in a car when it was struck by a missile, Moaiya Hassanain, an official at the Gaza health ministry, said.

The Israeli military said the Palestinian militants were hit from the air as they unloaded rockets from their vehicle.

An Israeli military spokesman said the army had  “targeted three terrorists in the Gaza Strip on their way to launch rockets at Israel”.

Islamic Jihad issued a statement blaming Israel for what it said was a “cowardly crime” and calling on all Palestinian armed groups to confront it.

“These crimes are the result of a Zionist attitude based on killing, violence and destruction, especially in the absence of a strong Arab and international position, which ought to protect the interests of the Palestinian people,” he said.

Earlier in the day a rocket was fired from Gaza into Israel without wounding anyone, according to the Israeli military. 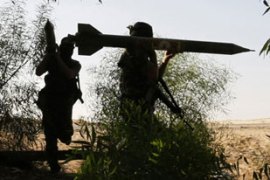