Mahmoud Ahmadinejad, the Iranian president, maintains that Iran will hold nuclear talks only with the IAEA, stressing the country’s right to develop its nuclear programme.

“Resistance is the secret of the [1979] Islamic revolution and with increased popular support, we will enter the international scene with more decisiveness than before,” he said on Wednesday.

Saeid Jalili, Iran’s chief nuclear negotiator, also insisted that Iran would continue, saying: “We will not wait for others to give us permission to pursue our path of progress.

“The era in which a few countries imposed their standpoints on others is over.”

Mohamed ElBaradei, the IAEA director-general, said in Vienna there was a “high probability” that Iran worked to develop nuclear weapons in the past, if intelligence information in that regard is genuine.

ElBaradei was referring to documents received by his organisation that point to a number of suspicious Iranian studies, including the modification of the model of a missile to carry a nuclear warhead.

“I am not a scientist, but I can tell you this: If this information is real, there is a high probability that nuclear weaponisation activities have taken place,” he said. “But I should underline ‘if’ three times.”

Also speaking at a meeting of the IAEA’s governing board, Glyn Davies, a US envoy, said Tehran may have enough enriched uranium for one atomic bomb.

Davies said Iran has enough material for a bomb, should it decide to further process  uranium.

He said Washington had concerns that Tehran’s leaders want the option to develop such weapons, a scenario he called a “dangerous and destabilising possible breakout capacity”.

The White House added to the pressure on Iran, saying that Ahmadinejad’s government must show progress towards ending its “illicit” nuclear activities.

Robert Gibbs, the White House spokesman, said: “Iran has to live up to its responsibilities and end its illicit nuclear programme. 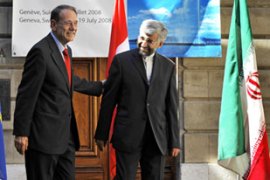 Tehran says that it has updated its proposal ahead of a US deadline.