According to Amnesty International, China is the world’s most prolific executioner with at least 7,000 people sentenced to death and 1,718 people executed last year.

However last month Chinese state media quoted senior Chinese officials as saying the government planned to cut down on the number of executions, reserving capital punishment for only the most serious crimes.

With the new donor system, launched by the health ministry and Chinese Red Cross this week, health officials want to encourage traditionally hesitant Chinese to sign up to donate their organs after they die.

The system, to be initially launched in 10 Chinese cities and provinces, will reportedly link potential donors with recipients and operate a publicly available waiting list of patients to increase transparency and fairness in allocating organs.

But the introduction of new system could be problematic with many Chinese against organ removal because of cultural reasons.

According to the China Daily, only about 130 people have pledged to donate their organs since 2003.

Al Jazeera’s Beijing correspondent Melissa Chan said the government faces an uphill battle as it tries to implement the system nationwide, with a massive information campaign to educate and promote organ donation among the Chinese population

Noel said a few other countries also occasionally extract organs from executed prisoners – a route, he said, opened the way for abuses.

Nicholas Bequelin, Asia researcher for Human Rights Watch, said China’s dependence on organs from death row had become so entrenched because there has been no system in place for organ donations.

“All organ transplants had to come from somewhere,” Bequelin said

“If you’re a prisoner and you’re about to be executed, you do not have a real choice, especially in a system… (that) is completely untransparent and notorious for abuses against prisoners, as the Chinese system is.” 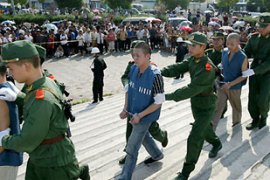 China to cut down on executions