The agreement between the world’s two most polluting nations comes less than five months ahead of a global climate change conference in Copenhagen.

Washington has in recent months called on China to work on reducing its carbon emissions but Beijing has been reluctant, saying that its economic development could be arrested by such a move.

The broad talks have also focused on nuclear proliferation, particularly in regard to North Korea, trade between the US and China and joint efforts to tackle the global economic crisis.

China’s vice prime minister said that he remains concerned about the value of his country’s US investments, and warned Washington against flooding global markets with dollars when the global economy is so unstable.

“As a major reserve currency-issuing country in the world, the United States should properly balance and properly handle the impact of the dollar supply on the domestic economy and the world economy as a whole,” Wang Qishan said.

As of May 31, Beijing holds about $800bn of US treasury securities, while Washington is facing its largest budget deficit ever.

Washington needs Beijing, the world’s third-largest economy, to keep buying its debt to finance a budget deficit that is expected to reach $1.8 trillion by the end of the fiscal year in September.

The US will help China get an increased role in governance at the International Monetary Fund (IMF) and World Bank, but Beijing must stop relying on flooding US markets with cheap imports that have contributed to a massive trade gap, Timothy Geithner, the US treasury secretary, said.

While promising to increase domestic markets for US goods, Wang said Beijing wants the US to export a greater number of high-technology goods to China.

“We will work to increase our imports from the United States,” Wang said.

“We hope the US will relax its controls and restrictions on exports to China of its high-tech technologies.”

The US secretary of state held a separate meeting on Tuesday with senior Chinese officials on the subject of North Korea and Iran respective nuclear programmes.

“We were very pleased by our discussions yesterday which were thorough, comprehensive, very open and candid and extremely useful,” Hillary Clinton said at the start of the meeting.

The US is looking for support from China, a veto-holding permanent member of the UN Security Council, on efforts to control Pyongyang and Tehran’s nuclear projects.

North Korea has already held a nuclear test explosion while Western nations have accused Iran of working towards a nuclear bomb, claims Tehran has denied. 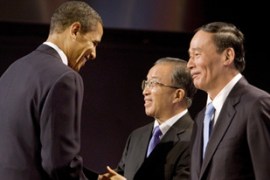