South Ossetia has evacuated hundreds of women and children to Russia over the past few days after six people were killed on Friday by sniper and mortar fire from Georgian positions, the breakaway province’s government said.

Jonah Hull, Al Jazeera’s correspondent in North Ossetia, said many of the women and children seeking shelter and safety are situated around the city of Vladikavkaz.

“They’re being housed in school and college buildings, the schools vacated of course for the summer holidays.

“They’re getting pretty basic care, and simply don’t know how long they’ll be here,” he said.

Georgia has denied readying for war and said there is no major evacuation.

South Ossetia broke away from the rest of Georgia after the Soviet collapse of 1991 in a conflict that killed thousands of people.

Russia has given the separatist province diplomatic and economic support, including granting citizenship to most of its residents.

“If events develop in the worst possible way, with the use of force, Russia will not be able to stand by, seeing as Russian citizens live in South Ossetia,” Yury Popov, the Russian ambassador at large, said.

Tensions between Georgia and Russia over South Ossetia and another breakaway Georgian region, Abkhazia, have soared in recent months since Moscow announced it was boosting ties with the separatists.

Meanwhile, South Ossetian officials said militia volunteers from southern Russia were beginning to arrive in the separatist province in preparation for a possible conflict.

Dmitry Medoyev, a spokesman for South Ossetia’s leadership, said in Moscow: “We are getting offers of help from the north Caucasus and from the Cossacks of southern Russia.”

Medoyev also said that South Ossetia could block oil shipments through Georgia in the event of conflict, without giving further details. 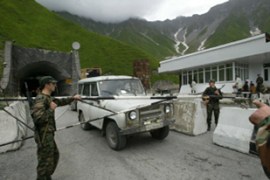 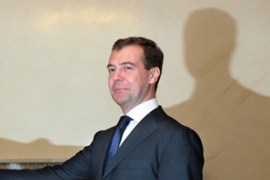