The United States already has a similar office in Cuba.

London’s Guardian newspaper reported on Thursday that Washington would announce its plan to establish an interests section staffed with diplomats within the next month.

“In recent years, there are many people from the United States – students, academics, businessmen, artists – who want to visit Iran. We support such a development between the two peoples,” Mottaki said.

He said that several US companies were already operating in Iraq, but refused to identify them “because of the delicacy of the issue”.

Mottaki’s comments came a day before William Burns, the US undersecretary of state, is due to meet Iranian representatives in Geneva to discuss Iran’s nuclear programme.

“I hope this progress [in the negotiation format] will also reflect on the content of the talks,” Mottaki said of Burns’ visit.

“If the negotiations continue in this way, I hope there will be a positive outcome.”

In remark made before he left Tehran, he also welcomed the participation of the US diplomat.

“If they enter [negotiations] with a constructive approach and by avoiding previous mistakes, we can definitely have good and constructive negotiations,” Iranian media quoted Jalili as saying.

Condoleezza Rice, US secretary of state, told reporters in Washington on Friday that Burns’s presence in Geneva “is an affirmation of the policy that we have been pursuing with our European allies … for some time now”.

“The United States doesn’t have any permanent enemies,” she said.

The US and other Western powers say that Iran is enriching uranium with a view to using it in a warhead.Tehran rejects the charges and says that it is pursuing nuclear technology to generate electricity. 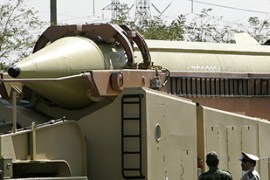 Nine missiles include long-range Shahab-3 that puts Israel within reach.