Kenya’s opposition Orange Democratic Movement (ODM) has suspended talks with the Party of National Unity (PNU) headed by Mwai Kibaki, the president, after a disagreement over the make-up of the cabinet.

Kibaki and Raila Odinga, head of the ODM, are deadlocked over how to share ministerial portfolios between the rival groups

“So far, there are no casualties but several vehicles have been damaged. Anti-riot police are managing the situation.”

The disagreement that led to the cancellation of talks on Tuesday centres on a handful of ministries in the 40-member cabinet that the two sides have been unable to agree on.

Odinga, who is set to become prime minister as part of a reconciliation deal signed in February, said he was ready to discuss the cabinet again with Kibaki once there was “clarity” over the disputed ministries.

However, Odinga said on Monday that he received a letter from the PNU, claiming that “the constitution grants the president exclusive executive powers to run his country on his own and that his powers supercede the provisions of the [power-sharing] accord”.

The power-sharing deal was brokered by Kofi Annan, the former UN secretary-general, and African Union officials, aimed to end weeks of post-election violence that killed more than 1,000 people and displaced hundreds of thousands.

Anyang’ Nyong’o, secretary-general of the ODM, said: “We have resolved that negotiations … be suspended until [the PNU] fully recognises the 50/50 power-sharing arrangement and the principle of portfolio balance.”

The protests in Kibera were the biggest since Kibaki and Odinga reached the power-sharing deal.

Wangui Mbatia, who works with families displaced by the post-election violence, said many Kenyans believed the dispute is about the control of lucrative portfolios.

“The reason they want them is because there’s money there,” she said.

“If there is a corruption-free government it should not matter who has what. It seems everybody is bent on securing something for themselves and that’s what makes us upset.” 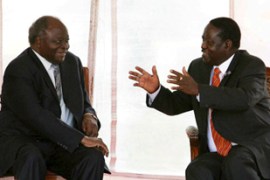 Kenya leaders in talks over cabinet

Announcement of new line-up delayed as dispute over distribution of posts persists.

Announcement of new coalition cabinet has been delayed amid dispute over positions. 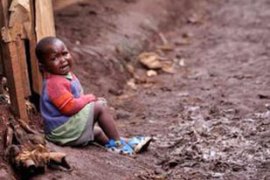 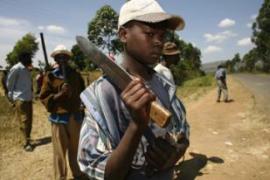 Deadlock is broken and agreement reached to announce cabinet line-up on Sunday.