She said the conditions were: “An end to violence against the population and the liberation of political prisoners; shed light on the events in Tibet; and the opening of a dialogue with the Dalai Lama.”
‘Peace and friendship’
Sarkozy’s office did not immediately return a call seeking comment on the interview, but Sarkozy has said himself he might boycott the opening ceremony if China continues its crackdown in Tibet.

Asked last week whether he supported a boycott, Sarkozy said he could “not close the door to any possibility”.

Responding to the reports the French president might boycott the opening ceremony, the Beijing Olympic organisers said Sarkozy’s threat was a personal matter that would not affect the staging of the Games.
“China and the Beijing Olympic organising committee are making every effort to welcome athletes, journalists and spectators from around the world to gather in Beijing this August,” said Sun Weide, a spokesman for the Beijing Organising Committee.
“For those who choose not to attend, that is his or her personal  decision and as far as we are concerned we will be doing everything  possible to turn the Beijing Games into a gala of peace and friendship,” he added.
No boycott
Over the last month, protests in Tibet, an autonomus region of China since 1951 have spread to other parts of China and have angered and embarrassed Beijing, highlighting what had been a controversial decision in July 2001 to award the 2009 Olympic Games to China.
But the International Olympic Committee (IOC) president on Saturday said he saw no momentum for a boycott of the Olympics opening ceremony.
Jacques Rogge also insisted he had no regrets about awarding the Games to China, but acknowledged a report by rights group  Amnesty International that suggests China’s human rights record is worsening.
“I have said many times that the IOC considers it is a wise choice in awarding the Games to Beijing and we have no regrets,” he said in Singapore, which will host the inaugural Youth Olympic Games in 2010.
While no country has announced a boycott of the Olympics, to be held in August, activist groups had stepped up calls for such action.
The IOC has long argued that the Olympics will be a force for good in China and that the event would help promote human rights.
The Chinese government has said 22 people died in the violence and crackdown on the Tibetan protests in China, but Tibetan exiles claim about 140 people were killed.
Source: News Agencies 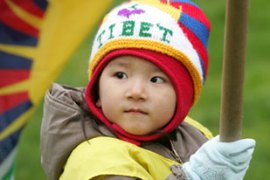 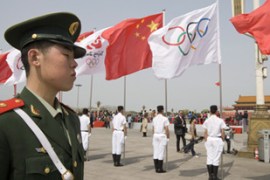