No ‘retreat’
Bush said that the so-called US troop surge of last year had enabled Iraqi forces to take the lead in the campaign against Shia militias in the southern Iraqi city of Basra.
He acknowledged that the current operation, which has left dozens dead, would “take some time to complete”.
However, he said said he was confident the results would ensure that “terrorists and extremists” would know they held “no place in a free and democratic society”.

Bush, who has been giving series of speeches on Iraq and the “war on terror” in recent days following the five year anniversary of the Iraq invasion, condemned critics, particularly from the Democratic party, who called for troop pullouts.

“No matter what shortcomings these critics diagnose, their prescription is always the same: Retreat,” Bush said.
“They claim that our strategic interest is elsewhere and if we would just get out of Iraq, we could focus on the battles that really matter.
“If US strategic interests were not in Iraq, in the convergence point for the twin threats of al-Qaeda and Iran … then where are they?”
‘Pause’ proposed
General Petraeus, due to testify before Congress in April on the so-called surge and possible troop cuts, has proposed a pause in troop withdrawals in order to assess the impact of having withdrawn five combat brigades since last December.
He has argued that any attempt to shrink US forces rapidly in Iraq could reverse gains reportedly made by US troops in the country in the past year.
There are currently about 154,000 US troops on the ground in Iraq.
Bush has said that any decision on troop numbers on Iraq would depend on recommendations from commanders on the ground there.
Source: News Agencies 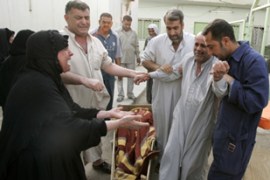