Paksut said a “preliminary study” would be finished within 10 days.

The 11 constitutional court members have to approve Court of Appeals chief prosecutor Abdurrahman Yalcinkaya’s indictement against the AKP on procedural grounds before a court case can begin.

A final verdict is not expected for several months.

Yalcinkaya’s indictement, handed to the court on Friday, charges that the AKP, which emerged from a banned Islamist movement, is turning its religious rhetoric into action, attempting to infiltrate state institutions to establish an “Islamist-inspired” system.

Yalcinkaya called for the party to be banned and that 71 party members, among them Recep Tayyip Erdogan, the Turkish prime minister, and Abdullah Gul, the president, be barred from politics.

The prosecutor’s move is the latest round in the battle between Turkey’s secular forces – among them the army, the judiciary and  academia – and the AKP since the party came to power in 2002.

Erdogan slammed the case as an attack on voters who handed his  party a second term in power with nearly 47 per cent of the vote in an election in July.

“The action….is not aimed at the Justice and Development Party but the will of the nation,” Erdogan told a party rally on Saturday.

Turkish shares, already battered by global stockmarket rout, plummeted more than 7.0 per cent on Monday in response to the bid to shut down the AKP which analysts say has left Turkey facing lengthy instability.

Tensions flared last month when the AKP pushed through parliament a controversial reform to allow women to wear the Islamic headscarf – viewed by many as a sign of defiance against secularism – in universties.

Media reports said the headscarf change and failed AKP attempts to limit the sale of alcohol were presented as evidence by Yalcinkaya. 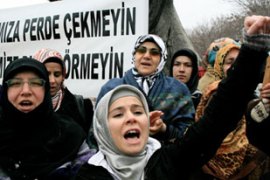