Among the victims were Taylor’s opponents and former allies who he thought had betrayed him, Marzah said.
One was a guerrilla commander known as Superman, who Taylor ordered executed and his severed hand brought to him as proof of his death.
The killers ceremonially ate Superman’s heart, and afterwards were given $200 each which they were told came from Taylor for “cigarette money”.
Taylor often leaned forward with a scowl on his face as he listened to Marzah’s testimony for more than five hours.

Asked under cross-examination if he had any “pangs of conscience”, Marzah replied “yes”, but said he had no difficulty carrying out his orders.

“I was a servant to my chief, Charles Taylor,” he said. He was adamant that Taylor had specifically ordered him to chop off hands, and paid a monetary reward for the killing of babies.

He recalled receiving an order from Taylor to cut open a woman close to giving birth because the unborn child “is an enemy”.
Under prompting from Courtenay Griffith, defence counsel, Marzah said: “It’s not difficult to kill a baby. Sometimes you just knock them on the head, sometimes you throw them in a pit, sometimes you throw them in the river and they are dead. Then you give the report to Charles Taylor.”
Prosecutors described Marzah as one of their key witnesses, testifying with inside knowledge of the former Liberian president’s operations in Liberia and neighbouring Sierra Leone.
In both countries he is accused of responsibility for the widespread murder, rape and amputations committed by soldiers loyal to him.
The first former African head of state to face an international tribunal, Taylor, 59, has pleaded not guilty to 11 charges of war crimes and crimes against humanity.

He is being tried by the UN-backed Special Court for Sierra Leone. His trial began last year but was halted for six months after a chaotic first day on which he fired his legal team.
The case resumed in January, when prosecutors began to call the first of dozens of witnesses expected to testify.
Describing the ceremony on the beach behind White Flower, Taylor’s executive mansion in Monrovia, Marzah said a woman was placed standing up in a pit between two oil drums, then covered over with sand.

Then a white sheep was killed on the spot. “It was a sacrifice,” Marzah said. Taylor “was the first person to put sand in his hand and put it in the hole”.

Marzah said the event happened in 1995, although Taylor did not come to power until he won an election in 1997.
At other times, Marzah repeatedly became frustrated and angry when questioned too closely about the timing of events, saying he had been with Taylor “from beginning to end,” and had done too much to recall the dates of each event.
Marzah said Taylor encouraged his fighters to “play with human blood” to create fear among his enemies.
He described militia checkpoints meant to terrify the population. After setting up roadblocks, “we used human intestines. We put heads on sticks for people to be afraid.
“When the person is executed, the stomach is split and you use the intestine as a rope”.
Source: News Agencies 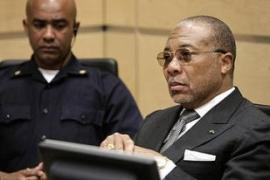 War crimes trial of ex-Liberian president restarts after a gap of six months.