On the morning of Thursday, February 21, there was silence in the streets. Even some schools were closed because of the rally that had been planned for later that afternoon.

Buses from all over Serbia came to Belgrade, the capital city. Transportation on the buses and trains were free and had been organised by the government for people to come and perform at the big “Kosovo is Serbia” rally.

This is the motto that has been constantly broadcast on national TV channels.

My friend from inner Serbia wanted to come to Belgrade to have coffee with me and then go back home on one of these free rides.

“But then, maybe better not to be seen around you,” he later said.

“You are a notorious Woman in Black, somebody might hurt you.”

(The Women in Black organisation is an international pacifist feminist group with a strong branch in Serbia. It has twice been nominated for the Nobel Peace Prize.)

Before the rally began, I crossed the square in front of the parliament. It was filled with a lot of half-drunk teenagers and the sad, miserable and angry people I used to see in protests against Slobodan Milosevic, the former president who died in The Hague.

It is a lovely spring day, but instead of relaxing, I was trembling.

What if something goes wrong and massive violence ensues? Who is responsible now for riotous damage to our lives and property? Nobody and everybody, really.

Kosovo Albanian or Serbs apart, Belgrade itself is the only place at risk today.

I hear phrases on TV such as “Kosovo is the heart cut from the body of Serbia,” and also lamentations about how much money was lost there, for instance in coal mines. These seem absurdly large sums for such a poor province – who lost those investments, I wonder.

Vojislav Kostunica, the prime minister, kicked off the rally with a fiery speech in front of the parliament building.

The rally was attended by tens of thousands and was as crowded as the demonstrations held during the toppling of Slobodan Milosevic, the former president, in 2000, or the funeral of Zoran Djindjic, the former prime minister, in 2003.

I had attended both of those events, prompted by my conscience and my duty. But I decided to avoid today’s rally, though I am curious to see the faces of the organisers.

It will be the usual crowd on stage at the rally: Prominent Serbian nationalists, like the world famous film director Emir Kusturica, and Milorad Dodik, the president of the Bosnian Serbs.

Ratko Mladic and Radovan Karadzic, who are wanted by Nato for war crimes during the 1994 Balkans war, are hiding in the massive crowds, too. Rumour has it that they are both in Belgrade now.

Our prime minister, who hardly ever addresses his people, delivered a screaming speech about nationalism. I don’t remember ever hearing Kostunica so angry, loud and pathetic, like an ageing rock star.

He is lambasting various world powers and condemning the “fake” state of Kosovo, almost publicly cursing them, while extolling the Great Serbs with their pride and honour.

Now Vladimir Putin, the Russian president, is a Slavic hero.

World famous stars are at the rally, too. Novak Djokovic, the tennis player, speaks like a robot on the screen, saying he will never let go of Kosovo. Kusturica, the film director, interrupted shooting his movie in the US and returned to speak live to the crowds in Belgrade.

The prime minister calls him a Serb – actually Kusturica has changed his name from the rather un-Slavic “Emir” to “Nemanja,” the ancient Serbian king.

The swaggering film director speaks against the local traitors and calls them “mice.” The mice would be us … me … the Women in Black.

Kusturica spoke of Kosovo as the mythical cradle of Serbs – this is something all the public figures must agree on.

Kosovo is the historical battlefield when the Serbs gloriously lost the Jerusalem of Europe to the Turks in 1389.

Everybody knows it is gone, lost in the ethnic cleansing wars of Milosevic during the 1990s.

But nobody dares to say that.

Kosovo has the graves and the churches of both nations. Serbian kings and Serbian poetry came from there. It was the borderline of wars between Muslims and Christians – an old, new war.

After the Nato bombings of 1999, 200,000 Serbs left the province and are living as refugees in Serbia proper. It is not a resolved issue yet.

Kusturica says he does not believe in Hollywood myths but in Kosovo myths. Why embrace myths at all? In the meantime, the Turkish and Croatian embassies have been attacked and a Nike shop has been looted.

For some, the rally later ended with prayers at the Sveti Sava (Saint Sava), the biggest Orthodox church in the Balkans, but where are the police? They merely claim this is the biggest rally ever held in Belgrade.

Close to my home, the hooligans are in some pitched conflict with the police. Should I remove my name from my own door? No, when things really get bad in Serbia, the police arrive in company with the hooligans.

The US embassy is being attacked right now.

By 7:00 pm, there is no police presence at the embassy. A TV reporter sounds really afraid as he reports the smashing and burning of the embassy. The German bank in downtown Belgrade is attacked too.

Right now, I hear that the American embassy is broken into and burning with Molotov cocktails. The TV coverage reminds me of when people looted the parliament to topple Milosevic.

Boris Tadic, the newly-elected president of Serbia is right now in Romania. He avoided the rally at the last minute, even though his party had supported it.

The country may be on the verge of a state of emergency.

The Serbian political parties, who were the official organisers of the rally (notably absent were the five per cent dissident politicos), said that Belgrade had to show its real face to the world – that of a calm and dignified Serb.

But what is calm and dignified about the gutted McDonald’s, the burning embassies and foreign-brand shops with their broken windows and looted merchandise?

Nevertheless, our high-ranking officials repeat over and over on the TV channels that nothing compares to the loss of Kosovo.

On the day after the riots and violence, the streets are suspiciously clean. The local government has taken care to obscure the shame of the rioting, because obviously, it has echoed around the world and Serbia is once again leading the headlines in the foreign press.

The Serbs, with their legitimate right to mourn for the loss of Kosovo, were transformed into vandals who looted their own city. They broke into many foreign shops, carrying off foreign-branded goods made by those powers which gave Kosovo away.

Footage of the broken windows, burned flags, demolished embassies, and drunken teenage patriots is making the rounds on YouTube. Our newly-elected president, who wisely and rather obviously retreated to Romania during the ruckus, called for peace and order last night.

Other participants of the rally have no such regrets. The truest “heroines” of this charade are two young blondes filmed by candid camera and posted on YouTube in a long snippet called “Kosovo for tennis shoes.“

These ‘wannabe’ global consumers are relentlessly looting sports clothes from broken windows and dragging them in heaps through a town in chaos. 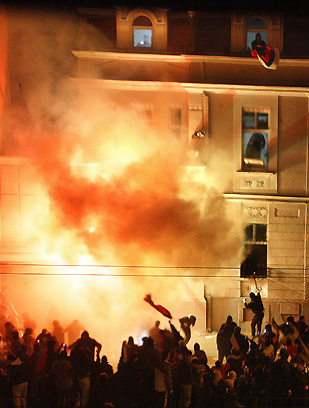 Today on the streets I saw the worried faces of people who survived the night of the “popular rally”; they were in deep anxiety.

Some other young girls – they obviously didn’t loot for shoes – were saying in muted voices, “there were not enough police”.

The US embassy evacuated much of its personnel. The German, Slovenian, and Croatian embassies today closed their consular departments.

No visas for bad Serbs, who shun the world to be swiftly shunned in turn. Meanwhile, the police have arrested 190 people.

The damage to the city is still being assessed; there are burned cars, destroyed traffic lights, burned apartments, and smashed shops.

Last night during the escalating violence my friends from Italy, Norway and Kosovo phoned me.

Nora from Kosovo offered me her own home if I didn’t feel safe within Belgrade. Nora admitted that it sounded nonsensical, but it was a sincere offer.

One group of dissident Serbian students from Belgrade wanted to join in solidarity with students in Kosovo for a peace rally.

The peacemakers weren’t allowed into Kosovo, however as they were considered “potential troublemakers”.

There is one known fatality from the past two days of chaos – a severely burned body was found inside the vandalised US embassy. He has no name, no face and is probably a Serbian hooligan overwhelmed by his own arson.

The latest victim of a lethal myth.

Belgrade will be licking its wounds this weekend. Not much going on in the streets except for people collecting rubble.

After the fall of Milosevic during the big rally in 2000, we all together cleaned up the streets and it was a joyful task, but today it is a shameful secret duty of the citizens.

The girls who looted tennis shoes were interviewed by national TV and they said without regret: “We took the clothes because we are poor and everybody did it. Those who filmed us were looting too.”

Serbia is split in half, as the last elections proved when the democratic candidate Tadic won over the radical right-wing Dragan Nikolic with a narrow margin. Half of Serbia is for the EU option the other for Russia.

Earlier on Saturday, local media criticised a Russian news broadcast of the rally in Belgrade for labelling our assassinated premier Zoran Djindjic as a traitor and US agent. Russia is buying public enterprises in Serbia and counting on its political influence in the region.

But Serbia is geographically a part of Europe and culturally a melting pot.

Right now, while Serbia is fighting for a national identity, European unity is transcending borders.

Some day, in 10 years probably, both Kosovo and Serbia will be in the same EU country and these dangerous politics and myths will not be necessary anymore.