“It is nothing more than an intermission,” Charnvit Kasetsiri, a historian and former rector of Bangkok’s Thammasat University, told the Associated Press.

The group, which has led more than six months of street protests, has vowed to wipe out all connections to Thaksin in government, accusing the former leader of gross corruption and seeking to undermine Thailand’s much-revered king.

Despite its name, the PAD wants Thailand to abandon one-person, one-vote democracy and replace it with a mixed system in which most representatives are chosen by profession and social group.

It says Thailand’s majority rural population – who have given Thaksin and his associates a series of election wins – are too poorly educated to responsibly choose their representatives.

On Thursday politicians from the three ousted parties that made up Somchai’s ousted coalition were due to continue meetings to decide on a permanent candidate to replace Somchai as prime minister.

Although disbanded and with several of their MPs banned as a result of Wednesday’s court ruling, the parties have vowed to regroup under a new name.

Despite their losses analysts say they still remain strong enough to form a government. 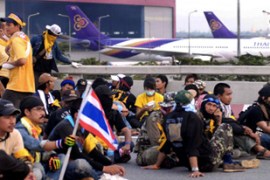 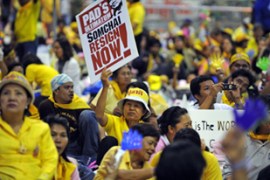 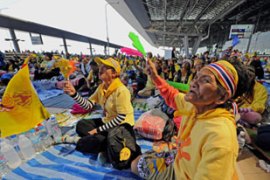