Toyota Motor Corp, which makes the Camry sedan and Prius gas-electric hybrid, has never reported a full fiscal year loss since it began disclosing its operating profit in 1941.

“It looks as though Toyota will fall into red ink for the full year,” Mamoru Katou, an automotive industry analyst at Tokai Tokyo Research, said.

“Things have clearly gotten worse since the earlier outlook of breaking even.”

Japanese manufacturers have also suffered from a strengthening yen which has made the country’s exports less attractive.

Toyota, which for years has seen brisk sales and profits as interest grew in its fuel-efficient vehicles, has been vying with the US’s ailing General Motors for the title of the world’s top-selling car maker.

The Japanese company had looked set to dethrone the Detroit-based General Motors, but the company has since reigned in its expansion plans as the global crisis takes a heavy toll on the industry.

GM and Chrysler – two of Detroit’s so-called Big Three – are on the verge of collapse, while Japan’s second largest automaker, Honda, this week also sharply revised its growth forecasts.

Earlier this week, Honda lowered its profit forecast for the fiscal year ending March 2009 to 185 billion yen ($2.06bn) – less than a third of the 600 billion yen earned the previous fiscal year. 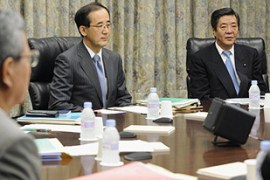