Prosecutors said Bagosora, formerly a cabinet director in the defence ministry, assumed control of military and political affairs in Rwanda after Juvenal Habyarimana, then Rwanda’s president, was killed when his plane was shot down.

Bagosora was said to have stormed out of peace talks in Tanzania saying he was returning to Rwanda to “prepare the apocalypse”.

Linda Melvern, a journalist and a consultant for the International Criminal Tribunal for Rwanda, told Al Jazeera that Thursday’s convictions would “mean a lot for the people of Rwanda”.

“We can only hope that life [in prison] will mean life and wherever he [Bagosora] serves his sentence there is a guarantee that he will be secure … The genocide was extraordinarily brutal and these convicts are the most brutal, brutal, racist people.”

But she said that many of those who played roles in the killings had yet to be brought to justice.

“The original list that I have of category one perpetrators – those who financed and organised the genocide – has some 240 names, so there are very many genocidaires who are still at large,” she said.

Kennedy Ndahiro, the editor of the Rwandan daily newspaper The New Times, told Al Jazeera: “The mood here is that something is being seen to be done after 14 years of waiting.”

But Ndahiro said that generally the view in Rwanda is that the tribunal has been “very lazy” in taking so long to begin convicting those culpable.

Earlier the tribunal found Habyarimana’s brother-in-law Protais Zigiranyirazo, known as “Monsieur Z”, guilty of genocide and sentenced him to 55 years in prison.

Zigiranyirazo was accused of being a member of the Akazu, the ruling elite of Hutu family members and relatives who are believed to have plotted to exterminate the minority Tutsis.

He was said to have been a member of the notorious Zero Network of death squads which killed hundreds of Tutsis and opposition leaders in the years leading up to the genocide.

Prosecutors said Zigiranyirazo sanctioned roadblocks to be set up near his three residences and paid for a mass grave to be dug outside his compound to bury those killed.

Zigiranyirazo was also said to have armed, trained and clothed the Interahamwe fighters who conducted most of the killings.

The court began its work in 1997 and has until the end of the year to wind up its activities and until 2010 to hear all appeals.

The UN General Assembly is discussing whether to extend the court’s mandate. 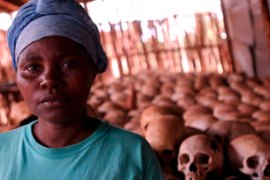 Tribunal to rule on Rwanda genocide

Alleged architect of the 1994 mass killings appears before a UN-back court.