Further student demonstrations are already planned on Thursday in Athens and Thessaloniki, Greece’s second largest city, to protest against the December 6 killing of 15-year-old Alexandros Grigoropoulos.

The riots that followed the teenager’s death are the worst Greece has seen in decades, feeding off widespread dissatisfaction with the unpopular conservative government and anger over social inequality and economic hardship.

Hundreds of shops and banks have been smashed, torched or looted as groups of masked and hooded youths rampaged through cities for several nights.

More than 300 people have been detained or arrested during the violence.

Although the rioting has abated, small-scale attacks continue.

About 12 youths on motorcycles set fire to a police bus in the centre of Athens on Wednesday. The driver managed to escape the fire and no one was hurt.

About 40 protesters also occupied the offices of the GSEE, Greece’s largest labour union.

Yiannis Panagopoulos, the GSEE leader, said: “I believe they have chosen the wrong target… The GSEE does not govern this country. So it’s wrong to undermine the labor unions.”

In Thessaloniki, police said a bank and a local citizens’ advice office were firebombed before dawn on Wednesday in attacks that caused damage but no injuries.

Greece’s opposition socialists have accused the government of mishandling the crisis and worsening the effects of the global economic downturn.

The socialists are calling for of Costas Karamanlis, the prime minister, to resign and call new elections, a demand he has rejected.

Meanwhile, officials at Athens international airport said that all flights will be halted between 10:00 and 13:00 GMT on Thursday because of a strike by air traffic controllers.

Air traffic controllers are joining protests by the GSEE, which is planning a rally in central Athens to demand pay raises and greater job protection. 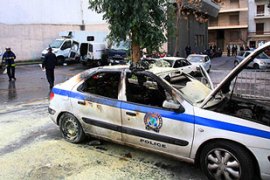 State television station occupied in demonstration against killing of teenager. 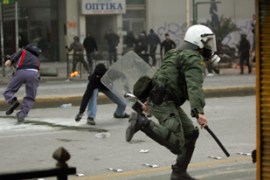 Calls for peaceful protests after 48 hours of unrest sparked by teenager’s shooting. 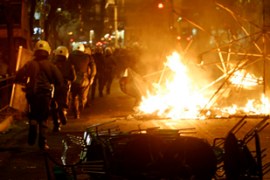