These are the key developments that have led to the formation of the new Palestinian unity government:

January 30: The Quartet group (The UN, EU, US and Russia) say “all members of a future Palestinian government must be committed to non-violence, recognition of Israel, and acceptance of previous agreements and obligations.”

March 18: Hamas submits its cabinet to president Abbas (24 ministers including 8 MPs). In response, the US, EU, and Israel boycott the new government and say they will suspend aid to the government.

April 16: Iran announces an offer of $50 million in aid to the Palestinian authority.

May 8: Three Palestinians killed and 10 wounded in clashes in southern Gaza, near Khan Yunis, between rival Hamas and Fatah supporters.

May 11: Prominent Palestinian prisoners in Israeli jails release a document calling for a national unity government between Hamas and Fatah.

June 3: A new security force loyal to Mahmoud Abbas, the Palestinian president, is deployed in the West Bank.

June 16: The EU endorses a new policy to channel aid directly to the Palestinians, bypassing Hamas.

June 25: Palestinian fighters launch an attack in Israel that results in the deaths of two Israeli soldiers and the capture of another, Corporal Gilad Shalit.

June 27: Hamas and Fatah reach an agreement based on the prisoners’ document which includes the forming of a national unity government.

June 28: Israel launches Operation Summer Rains in what it says is an attempt to recover the captured soldier. The ongoing operation initially consists of heavy bombardment of bridges, roads, and the only power station in Gaza. Hundreds of Palestinians are killed during aerial and ground attacks over the following months.

September 1: Mahmoud Abbas says Hamas and Fatah have agreed on the principles of a power-sharing government and may soon form a new cabinet to lead the Palestinian Authority. Under the plan, Abbas is to dissolve the current Hamas-led cabinet within 48 hours.

September 23: The agreement breaks down, with Hamas’s refusal to recognise Israel reportedly at the heart of the continued disagreements.

October 1: Eight people are killed in Gaza in factional infighting between Hamas and Fatah as a new wave of violence erupts.

October: A number of mediation attempts take place. Egypt and Qatar send their foreign ministers to meet with both sides. Other Palestinian groups like the Islamic jihad and the Popular Front for the Liberation of Palestine mediate between the two sides to stop the clashes.

November 13: Following talks between Hamas and Fatah, both sides agree to form a government of technocrats unaligned with either movements. Muhammad Shbeir, a Gaza academic who is close to Hamas but not a party member accepts, the offer to head the government.

November 14: Hamas again reiterates that it will not recognise Israel and the agreement stalls.

December 15: Hamas accuses Fatah of involvement in an gun attack on the Ismael Haniya, Palestinian prime minister, as he crosses the border from Egypt into Gaza.

December 16: Abbas calls for new elections as a solution to the ongoing crisis.

January 21: Abbas meets Khaled Meshaal of Hamas in Damascus in response to an invitation by Bashar Al-Assad, the Syrian president.

January 30: Fatah and Hamas reach a ceasefire agreement mediated by Egypt after a series of clashes lead to the death of 32 Palestinians. Both sides welcome a Saudi initiative to meet in Mecca.

February 8: Hamas and Fatah agree a deal in Mecca to end factional warfare that has killed scores of Palestinians and to form a coalition, hoping this would lead Western powers to lift crippling sanctions imposed on the Hamas-led government.

February 9: The Quartet welcomes the role of the Kingdom of Saudi Arabia in reaching the agreement to form a Palestinian National Unity government but later reaffirms that it must obey international demands to recognise Israel, renounce violence and abide by previous peace agreements.

February 15: Ismael Haniya and his cabinet resign. Haniya is re-appointed by President Abbas and begins the process of forming a new Palestinian unity government.

March 15: Palestinians reach agreement on the formation of the government.

May 15: Factional fighting erupts in Gaza between Fatah and Hamas groups.

June 13: Hamas takes control of the north of the Gaza Strip declaring it a “closed military area”.

June 14: Abbas dismisses the Hamas-led government and announces that he will rule by presidential decrees. Hamas forces attack Fatah in Gaza and drive them out of the Gaza Strip.

June 16: Fatah storms Hamas-controlled parliament based in Ramallah in the West Bank.

June 25: A summit in Sharm El Sheikh, Egypt, attended by Jordan, Egypt and Palestinians pledges support to the Abbas government, but Cairo calls for reunification with Hamas.

July 14: Fayyad resigns, but is immediately asked to form a new cabinet.

November 12:  A large demonstration dedicated to the memory of Yasser Arafat, the late president, is organised by Fatah in Gaza City. The demonstration, with over 200,000 participants, was dispersed by Hamas, who fired into the crowd killing at least six civilians and injuring 80.

January 1: At least eight people die in factional fighting in the Gaza Strip.

August 16: Abbas agrees to join a national committee designed to end arrests in the West Bank and Gaza Strip.

October 4: Leaders of Fatah and Hamas say they want to form a national unity government to rebuild the security forces and prepare for elections.

November 8: Hamas boycotts the Palestinian reconciliation conference which were to be held in Cairo on November 9. 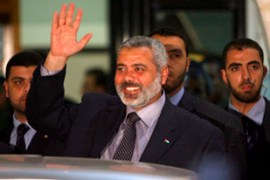