In response, Pyongyang threatened to slow down the process of disabling its nuclear programme.

“We will probably adjust the pace of pace disablement at nuclear facilities if [the aid] is suspended,” said Kim Kye-gwan, North Korea’s vice-foreign minister, the Kyodo news agency reported.

The six parties involved in the talks struck a landmark deal in February 2007 that promised diplomatic and economic incentives – including energy aid – to North Korea in return for giving up the nuclear programmes it spent decades developing.

But North Korea has refused to allow outside inspectors to take samples at its Yongbyon complex for verification of its declared nuclear activities.

The US state department said later that a Russian shipment of heavy fuel oil had arrived in North Korea and “will finish being off-loaded next week”, even though Russia had been party to the so-called understanding.

McCormack said that for technical reasons the Russian shipment would be the last until the impasse is broken.

The failure of the talks in Beijing all but dashed the hopes of George Bush, the US president, and his administration that they could make progress on North Korean disarmament before Barack Obama takes over as president.

The Bush administration had made solving the North Korean nuclear impasse a key foreign policy priority.

The leaders of South Korea and Japan condemned Pyongyang for its uncooperative stance in the talks in Beijing.

“Both leaders from the two countries expressed their regret that North Korea showed an uncooperative attitude toward joint efforts by the other participating countries [in the talks],” South Korea’s presidential office said in a statement.

The negotiations have suffered countless setbacks since they began in 2003 and did not stop Pyongyang from testing its first atomic bomb in 2006.

The US had announced plans to drop North Korea from the “terrorism blacklist” after reaching an apparent deal on earlier nuclear inspection demands.

That is part of the six-nation pact in 2007 promising North Korea diplomatic concessions and economic incentives, including energy aid, in exchange for total disarmament.

Under the terms of the 2007 deal, North Korea was to receive one million tonnes of fuel oil or equivalent energy aid in return for disabling and dismantling its main plutonium-producing plants in Yongbyon. 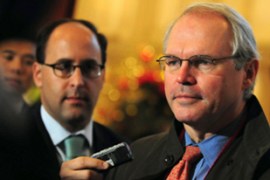 ‘No progress’ in N Korea talks 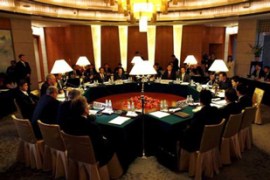 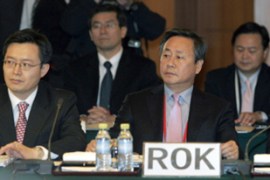 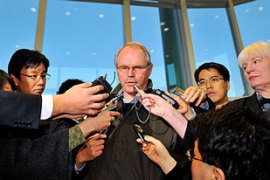 North Korea says it will not recognise Japan in forthcoming nuclear disarmament talks.