Indigenous leaders and their supporters say that the decision – if made official – would set a precedent protecting the rights of their people and protect the reservation from being targeted by loggers, prospectors and rice farmers.

Al Jazeera’s Gabriel Elizondo outside the supreme court in Brasilia, the capital of Brazil, said that the ruling, if confirmed, had repercussions not just for Brazil but for Latin America.

Brazil was one of the first countries whose top court took on the issue and both indigenous groups and rights organisations looked to the case as a “benchmark” to set a precedent for future cases, our correspondent adds.

However critics argue the decision will be an impediment to economic growth as well as a threat to Brazil’s security along its northern border.

The case centres on Raposa Serra do Sol, around 17,000 square kilometres of land home to 19,000 indigenous people, who comprise four tribes in the northernmost Brazilian state of Roraima, situated between Venezuela and Guyana.

However, a small but powerful and well-connected group of rice farmers with ranches inside the federally-recognised indigenous territory have refused to leave the demarcated area.

Supporters of indigenous rights say Brazil’s rapid rate of development  means land must be allotted for the nation’s indigenous peoples.

According to FUNAI, the government agency that oversees indigenous people in Brazil, the country is home to about one million Indians. They come from 220 different indigenous groups that speak more than 180 languages.

Indian land accounts for about 12 per cent of Brazil’s territory but in 2007 92 Indians were killed in land disputes. 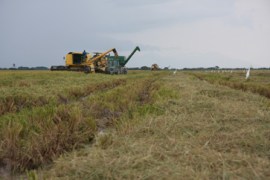