Ahmed, who heads a moderate faction among the Somali opposition groups, said peacekeepers could help create a chance of reaching a peaceful settlement in Somalia.

“We need also the stabilisation force to be brought to Somalia,” Ahmed said.

“We must not miss this very essential window of opportunity when we are actually seeing the light at the end of the tunnel.”

While Somalia’s transitional administration and some opposition groups are trying to form a government of national unity under UN-led talks in Djibouti, other hardline factions have rejected the peace process.

The African Union has 3,400 soldiers in Somalia helping to protect the capital, but there are fears that without reinforcements security will deteriorate when the Ethiopians leave.

The AU has also urged the UN to form a stabilisation force for Somalia to step in when Ethiopian troops leave.

A statement from the AU’s “Panel of the Wise” urged the UN to authorise “without any further delay the establishment of an international stabilisation force which will build on an enhanced Amisom [the AU force in Somalia] and further the cause of peace”.

Fighting in Somalia has killed 10,000 civilians since early 2007 and driven more than a million from their homes.

Nur Hassan Hussein, the Somali prime minister, also pleaded with the international community to step in when Ethiopian troops went home, saying there was hope for the peace process.

“There is a very real concern that a security vacuum will be inevitable, with the consequences you can imagine,” he said. “There is a great danger the situation may turn into chaos.”

Somalia’s government has struggled to battle Islamic fighters waging an Iraq-style insurgency. They control most of the south and have been slowly advancing on the capital, Mogadishu. 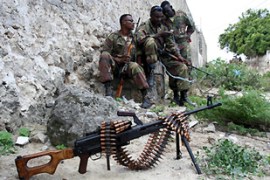 Ethiopia to withdraw from Somalia

Announcement to pull out troops by year-end raises AU fears of instability.