“No one has the right to massacre the people of Guinea-Bissau in order to steal power by means of the gun.”

The walls of his fortified house were scarred with bullets and its floors still were littered with shell casings.

But calm appeared to have returned the capital, Bissau, and Vieira assured citizens that “the situation is under control”.

Guinea-Bissau has had multiple coups and attempted coups since 1980, when
Vieira himself first took power in one.

The UN says impoverished Guinea-Bissau, on the Atlantic coast of Africa, is a key transit point for cocaine smuggled from Latin America to Europe.

In parliamentary elections held a week ago, Kumba Yala, the opposition leader and former president, accused Vieira of being the country’s top drug trafficker.

Abdoulaye Wade, the president of neighbouring Senegal, ordered troops to the border with Guinea-Bissau on Sunday after receiving a panicked phone call from Vieira in the night, El Hadj Amadou Sall, Wade’s spokesman, said.

“The troops will stay at the border until we are sure the situation has stabilised,” Sall said.

The African Union condemned the attack.

The AU rejects “any unconstitutional change of government and condemns in
advance any attempt to seize power by force”, Jean Ping, the AU commission chairman, said in a statement.

Ban noted “with great concern reports of the alleged involvement of elements of the Armed Forces of Guinea-Bissau in the attack, and calls upon them to refrain from any measures that could further destabilize the country”, his spokesman said in a statement.

Guinea-Bissau, a former Portuguese colony, has a history of coups and misrule. 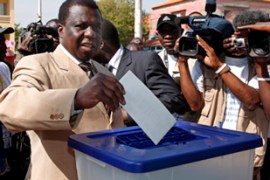 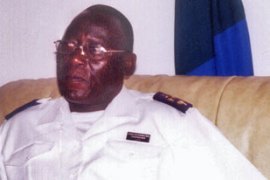