“There is no longer an American dream, at least for the moment with the economic situation,” said Victor Clark, the director of the Tijuana-based Binational Centre for Human Rights, which works with illegal migrants.

“News of mass raids snowball through towns that send a lot of migrants. In small northern towns, the news is that there is no work for Mexicans in the United States.”

There have been other indications that Mexican emigration, which is still mainly to the US, has been falling dramatically.

The US Border Patrol has reported a 39 per cent drop in the capture of migrants trying to cross the frontier illegally since 2005.

Remittances fell 12 per cent to $1.9bn in August, the biggest drop since record-keeping began 12 years ago, according to the Mexican central bank.

Mexican authorities say the country may also see a surge of returning migrants as the economy worsens in the US.

Mexico City’s municipal government has predicted that up to 30,000 more immigrants than usual will return from the US over the next few months. 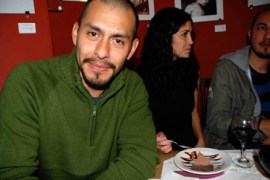 US immigration issue key for Mexico

Mexicans speak out on what they think an Obama presidency should focus on.