They also highlight the Chinese authorities’ inability to ensure safety standards across the food production process, despite promises to do so.

The government of Dalian, a northeastern port city where Dalian Hanwei is based, said it would punish anyone found responsible for the contamination of eggs, the official Xinhua news agency reported.

On Tuesday Wal-Mart Stores, the world’s largest retailer, said it had removed the Select brand of eggs made by Dalian Hanwei from all of its stores in China.

Dalian Hanwei has apologised to consumers in Hong Kong while a mainland official said the company had started a nationwide recall of eggs suspected to be contaminated with the chemical, which is used in plastics and fertilisers.

It remains unclear what effect eating melamine-tainted eggs may have on humans, but in the recent dairy scandal, milk formula heavily contaminated with the chemical caused kidney stones in babies.

It was blamed for sickening 54,000 children and linked to the deaths of four infants. More than 3,600 children remain sick, health officials say.

Melamine is believed to have been added to fool quality control tests on watered-down milk. Nitrogen-rich melamine can give the impression that protein levels are higher than they actually are.

It was unclear how the chemical made its way into the eggs, but a Chinese agriculture official was quoted by the Beijing News newspaper on Tuesday as saying that it was highly likely that melamine had been added to chicken feed.

The report said the agriculture ministry has been inspecting animal feed for melamine since last year, after a Chinese-made pet food ingredient containing the chemical was linked to the deaths of dozens of dogs and cats in the US. 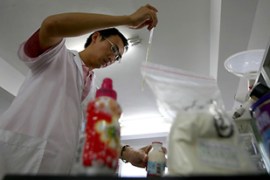 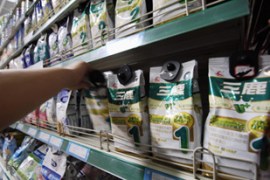 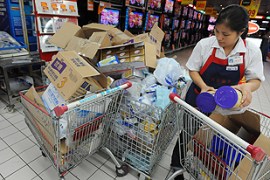