“Regrettably, after four days of intense negotiations, we have failed to agree on the… key issue, which is the equitable allocation of ministerial posts and the composition of cabinet,” Tsvangirai said.

“We believe that for an inclusive government to work, the principles of equitable sharing of power… should be embraced. It appears we are far apart on this principle,” Tsvangirai said.

Tsvangirai said he still hoped that diplomatic efforts by fellow African countries would find a way to save the month-old power-sharing deal, seen as the best chance for rescuing the country from economic collapse.

He said that both sides had agreed for the Southern African Development Community (SADC) to consider the deadlock.

Thabo Mbeki, the former South African president, who has been mediating the talks, said an agreement was still possible.

“I wouldn’t say it’s a deadlock. Negotiations are continuing. The matters are capable of solution quite easily,” Mbeki said.

The SADC’s three-nation security panel, made up of the heads of state of Swaziland, Mozambique and Angola, is due to meet on Monday.

“We call upon the SADC and the AU [African Union] to use their collective wisdom to help unlock the deadlock,” Tsvangirai said.

“We are maybe going to have a completely different mediator and an increased role by the African Union and SADC.” 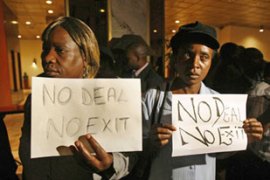 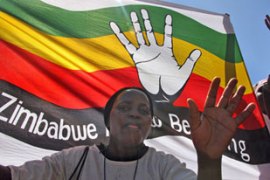