Hor Namhong, Cambodia’s foreign minister, said 10 Thai soldiers who surrendered and were taken prisoner, would be returned to Thailand if Bangkok requested.

“The prime minister has ordered that the 10 soldiers be treated well,” he told a news conference in Phnom Penh.

Colonel Sunsern Kaewkumnerd, a Thai army spokesman, blamed the Cambodians for starting the battle, which he said “was triggered by a Thai patrol unit’s encounter with their Cambodian counterpart”.

“The Cambodian side ignited fighting with rifles,” he said, adding that he believed talks between the two armies would prevent the situation from escalating.

“Thai businessmen who have no need to be in Cambodia now, please rush back to Thailand… We have our evacuation plan ready,” Sompong said.

The border clash came after Cambodia had said that 500 Thai troops had started to deploy close to the border area.

Thai television on Wednesday showed military lorries loaded with tanks heading towards the border and troops setting up mortars, while the Thai air force said its fighter jets were on stand-by.

Before the fighting broke out on Wednesday, Somchai Wongsawat, the Thai prime minister, had given assurances that Thailand would not resort to violence and that talks would resume.

“I want to insist that we will use peaceful negotiations. We will not be an invader. We will not use violence.”
At the centre of the dispute is Preah Vihear, an 11th century Hindu temple which the UN listed as a World Heritage Site in July, a ruling that re-ignited a decades-old feud. 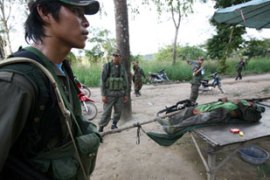 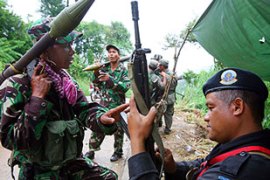 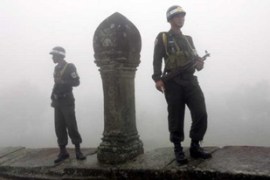