Both Mwai Kibaki, Kenya’s president and Raila Odinga, the opposition leader, said they were committed to reconciliation and called for calm.

Meanwhile, Condoleezza Rice, the US secretary of state said in Washington that the situation in Kenya is “deeply concerning”.
“The election was not one that inspired confidence in the Kenyan people and therefore there needs to be a political arrangement,” Rice said.

The UN special adviser on preventing genocide and mass atrocities has warned that leaders responsible for the post-election violence could be held to account for violations of international law.

However, Francis Deng said he was not saying that anything that had happened so far in Kenya amounted to genocide.

“We’re not talking the g-word at this point, but the kind of atrocities we’re seeing could easily escalate to dangerous levels,” he said.

Helicopter fire
Police in Naivasha insisted that the helicopters were firing rubber bullets.
More than 600 people carrying machetes and clubs were trying to reach the Luo who had taken shelter in the police post after two days of violent clashes in the town.

The helicopter attack drove the crowd back as police prepared to evacuate about 300 Luo refugees.

“The crowd is unruly and we want to disperse them, that is why we are using helicopters,” a police commander told the AFP news agency.
Naivasha has seen some of Kenya’s worst violence in recent days after largely avoiding the unrest in the first few weeks that followed the disputed re-election of Mwai Kibaki, the president.

Many from the region’s Luo and Luhya communities have fled from gangs of ethnic Kikuyu, Kibaki’s tribe, who had vowed revenge for the killings of members of their community in other parts of the country.

Crowds set fire to homes and thousands of looters smashed shop windows in the town before the helicopter attack on Tuesday.

Police said that they were not ruling out “political motives” connected to the disputed presidential elections on December 27 in the killing of Mugabe Were, an Orange Democratic Movement (ODM) politician.

“We suspect a foul hand of our adversaries in this,” Raila Odinga, the ODM leader, said.

“Of course there are lots of rumours going around. We hope and expect that investigations are going to be carried out by the law-enforcement agencies, but as you can see, the country is drifting into a state of anarchy.”

Police said that two men shot Were as the politician drove up to the gates of his home in the Woodley district just after midnight, then fled the scene.

“The two criminals who shot him did not steal the car or anything else.”

Police fired tear gas at mourners who had gathered at Were’s home, allegedly taunting officers.
Outside dozens of protesters manned burning barricades of tyres and uprooted telephone posts.
Kibera fighting
Al Jazeera’s Yvonne Ndege, in Nairobi, said that the police had told her that they are not treating this as a political murder.
Instead they say one of the city’s frequent violent crimes, such as a car jacking, may have led to the death.
Yet Ndege said there’s “every possibility” that Were was killed by a rival candidate for the seat in the December 27 legislative vote, held at the same time as presidential elections.
The seat is now vacant after Were’s death.

“As a consequence of this there has been some fighting taking place in Kibera – one of the biggest slums in Africa and an opposition stronghold – where people on the ground have reported seeing at least two bodies,” Nedege said.

“In Mr Were’s constituency, called Embakasi, there is a lot of tension. Apparently rowdy youths have been gathering in the market and several kiosks have been burned.”
Source : Al Jazeera, News Agencies 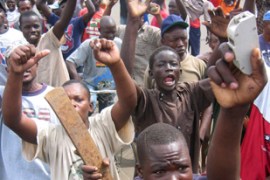 Rival tribes confront each other as troops move into western city to quell violence. 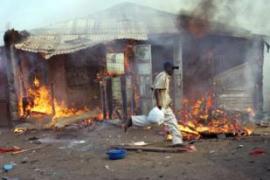 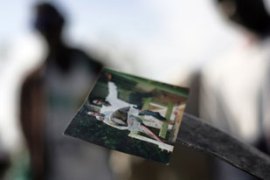 Scores of people killed as machete-wielding gangs clash in the western Rift Valley. 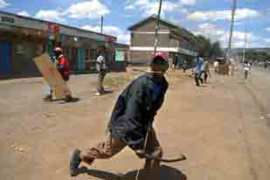