The law currently allow people as young as 15 to acquire guns for target or hunting purposes.

The National Bureau of Investigation said that eight female students were killed, along with one male student and a teacher. Another woman was injured before Matti Saari, a 22-year-old student at the school, shot himself.

Saari possessed a license for the gun he used, but was interviewed by police the day before the shooting after videos of himself firing a handgun at a shooting range were posted online.

He was released on Monday because police said they found no reason to keep him in custody.

“He [Saari] doesn’t seem to have fit the profile of somebody that might carry out an attack like this,” Al Jazeera’s Hamish MacDonald, reporting from Kauhajoki, said.

“He was not a loner – he had friends and we’re told that he seemed happy, that he was a social character. Yet as we’re seeing in the images from the Youtube video, he obviously had a much darker side.”

The media have focused heavily on how police, alerted to Saari’s online videos, could question him on Monday but not confiscate the gun and the government has called for an investigation into how police handled the case.

Urpo Lintula, a police spokesman, said Saari had acquired a permit for his weapon, a .22-calibre handgun, in August.

Vanhanen and other ministers visited Kauhajoki, a town of 14,000 people, as flags flew at half-mast on a national day of mourning.

Residents and mourners placed candles and flowers outside the school in Kauhajoki.

At the United Nations in New York, Tarja Halonen, the Finnish president, said the shooting showed the need to watch over the activities of young people on the internet and to renew discussions about handgun legislation.

Finland has one the highest gun ownership rates of any country in the world.

“We have of course a tradition of hunting in Finland and that that is the reason that people think we have so many guns in Finland,”  Laura Lodenius, part of Finland’s anti-gun lobby, told Al Jazeera.

“I think now that people are maybe starting to open up their eyes and realising that today’s gun owning is not that of 50 or 100 years ago and that it’s really a problem in today’s world.”

“We do have a high number of arms – 1.6 million to be exact – and for each license you actually need to be interviewed by the police,” he said.

“So we’re not talking about free guns per se in Finland.”

Finland suffered a chillingly similar shooting in November 2007 when Pekka-Eric Auvinen, an 18-year-old, killed eight people and then himself.

Finnish media focused on the similarities between the two shootings, including the use of boastful Youtube videos and the same calibre handgun. 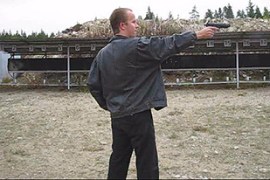