Fukuda, who had been in office barely a year, said he had decided to step down after failing to break a deadlock with opposition legislators in parliament’s upper house.

The former leader had battled plummeting approval ratings after he raised medical costs for the elderly.

Following his appointment, he is expected to fly to New York to attend the final days of the UN general assembly.

Aso, who favours spending and tax cuts to boost the economy, said his first priority would be to stimulate the economy – the world’s second largest but teetering on the brink of recession – with spending.

“When I look at the financial situation and other things, I feel like we’re in a turbulent period – not in peacetime,” Aso said as he headed to parliament, referring to the global financial crisis.

He has also vowed to defend Japan’s national interests by strengthening its alliance with the US.

Like Aso, Nakasone was uneasy with some of the free-market reforms during the 2001-2006 premiership of Junichiro Koizumi, who was popular with the public but blamed by some LDP members for alienating rural voters by cutting services.

The defence minister’s post would reportedly go to Yasukazu Hamada, who is known for his strong support of the military alliance with the US.

The finance ministry was expected to go to Shoichi Nakagawa, an outspoken nationalist who has raised controversy through strong criticism of China and his calls for Japan to study developing nuclear weapons.

Analysts expect Aso to call a general election as early as late next month in a bid to hold off gains by the rising opposition, which has pounded away at the LDP’s traditional strongholds in the countryside.

The LDP has been in power for all but 10 months since 1955, but Aso will be its third prime minister in two years as the party has struggled over a raft of scandals and, more recently, a faltering economy. 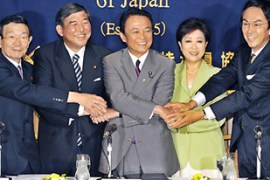 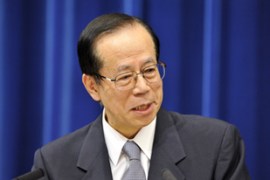 Surprise resignation after leader’s struggle to cope with divided parliament.