“I was happy to see that we were unanimous with the Armenian side on the need for mutual dialogue to remove barriers to improving bilateral ties.”

Sarkisian said earlier there was a “political will to decide the questions between our countries, so that these problems are not passed on to the next generation”.

But tensions remain between the two countries and security was tight during Gul’s visit.

At the start of the match about 80 young protesters gathered at a monument to victims of the killings in central Yerevan, laying flowers and lighting torches.

“We want to draw [Gul’s] attention to this monument, so he knows it is not standing empty and that people have gathered here to show that the young generation remembers everything,” said Airapet Babaian, the protest organiser.

The Turkish president’s arrival at Yerevan’s Hrazdan stadium was greeted by boos and hisses by Armenian fans and Gul watched the match from behind a special bullet-proof area.

The far stronger Turkish side ended up winning the match 2-0.

Turkey and Armenia have no diplomatic relations and have waged a diplomatic battle over Yerevan’s efforts to have the 1915-1917 massacre of hundreds of thousands of Armenians recognised as genocide.

Armenians say up to 1.5 million of their people were killed between 1915 and 1917 in orchestrated massacres during the First World War as the Ottoman Empire collapsed, a claim supported by several other countries.

Turkey rejects the label of “genocide”, arguing that 300,000-500,000 Armenians and at least as many Turks died in civil strife when Armenians took up arms for independence in eastern Anatolia and sided with invading Russian troops.

Turkey’s footballers were supported by only about 200 fans in a seating area that could have held 10 times more and was ringed by Armenian police. 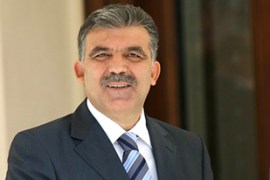 On 24 April 1915, Turkish Ottoman authorities arrested and deported 250 Armenian leaders marking the start of what Armenians say was a genocide that killed 1.5 million of their kin.

Armenia has rejected a conditional proposal from Turkey to establish political relations.