A lack of rain in the main February to April wet season has left at least 75,000 Ethiopian children under age five at risk from malnutrition, OCHA said.

“In terms of the urgency of the food crisis, the risk of children dying of severe malnutrition is the most urgent,” Holmes said on his way to a southern Ethiopian region devastated by the drought.

The UN appealed in June for $325.2m mainly for drought victims. Only 52 per cent of the appeal has been met.

In Arba Minch, about 500km south of the capital, Addis Ababa, farmers said they were waiting for emergency support to feed their families.

The UN children’s fund (Unicef) representative in the impoverished African country said the effects of the failed rains and rampant food inflation may drag on.

“The previous rains failed badly. It is very clear that many people in Ethiopia will continue to face problems in terms of food security,” Bjorn Ljungqvis said.

The southern region of Oromiya has also been badly hit, 6,700 children were diagnosed as suffering from severe malnutrition in early August.

Ethiopia suffered severe floods last year which destroyed most of the food crop. This year the drought has worsened the situation and food prices have soared by 330 per cent.

Of the 45,000 locals in need of food, only 38,000 are receiving help due to low government supplies, according to aid groups.

In May, the WFP said the price of staples such as maize and sorghum, a cereal grain crop, had increased by about 90 per cent in less than a year, while wheat increased by 54 per cent between September 2007 and February 2008.

In recent years, Ethiopia has suffered alternate flood and drought disasters that has affected millions of people.

Holmes said on Monday relief operations were underway across the country, “but we need to make sure it reaches everyone”.

“We need to make sure that [food shortages] don’t degenerate into a famine that we’ve seen before,” he said. 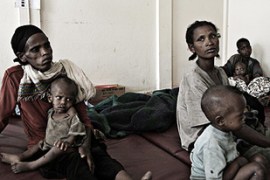 Government to up military spending by $50m, a week after appealing for famine aid. 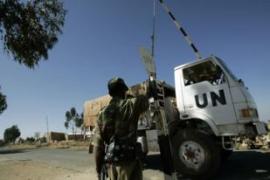 Peacekeepers trapped near Ethiopian border with only a few days of emergency rations.