Many of the casualties were caused when security forces opened fire in what the authorities said was an attempt to disperse demonstrators.

“One person died of bullet injuries while another was injured,” a doctor at Srinagar’s main hospital said.

The US-based Human Rights Watch has called on India to “refrain from using lethal force against violent protesters … unless it is absolutely necessary to protect life”.

Security forces patrolled Srinagar and other troubled areas of the state amid fears of attacks by groups opposed to Indian control on Friday, India’s Independence Day – a day when armed groups have traditionally carried out strikes.

“We have intelligence inputs that militants may try to carry out attacks on or before Independence Day,” SD Goswami, a defence spokesman, said.

Officials say security had been tightened even further for the event.
The celebrations will be boycotted by separatist leaders and the event has been marked as a “black day” in the region.

Authorities relaxed the curfew on Thursday for a few hours to allow residents to stock up on supplies.

Demonstrations began in June after a decision – later revoked – by the Kashmir government to donate local land to a Hindu pilgrimage trust.

The recent protests, which follow several years of relative calm in the region brought about by the India-Pakistan peace process, have triggered a new war of words between the two rivals, which each hold part of the disputed region and claim it in full. 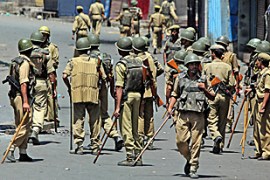 Residents in Srinigar pour onto streets to join funeral processions for two Muslims. 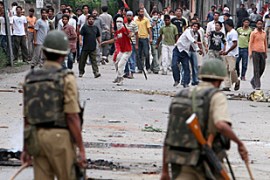