“Tonight, Americans witnessed a misleading speech that was so fundamentally at odds with the meager record of Barack Obama,” Tucker Bounds, a McCain spokesman, said in a statement, released late on Thursday.

“When the temple comes down, the fireworks end, and the words are over, the facts remain: Senator Obama still has no record of bipartisanship, still opposes offshore drilling, still voted to raise taxes on those making just $42,000 per year, and still voted against funds for American troops in harm’s way.

“The fact remains: Barack Obama is still not ready to be president.”

In his speech, Obama, the first black presidential nominee of a major US party, linked McCain directly to Bush and said their failed Republican policies were responsible for a faltering US economy and a decline in US standing in the world.

Obama, who opposed the US invasion of Iraq, promised to “end this war in Iraq responsibly” but said he would finish the fight against al-Qaeda in Afghanistan and would be willing to use US military power when necessary.

Speaking of domestic issues, Obama promised tax breaks for 95 per cent of families, more funding for education, health care for every American and vowed to tackle America’s dependence on Middle Eastern oil.

“He made promises of becoming independent of Middle Eastern oil in ten years – John McCain says the same thing. Anyone can make that promise, it’s a very shallow one. He called for clean coal – as if there is any such thing – and he promises to rebuild the United States military. That basically is a promise to increase the military budget.”

“I think it [Obama’s speech] was progressive … Obama laid out a vision of hope very much like John Kenedy [the former US president], but he buttressed that message of hope with specific plans, how he plans to fund it,” she told Al Jazeera.

George Wilson, a radio talk show, said: “He did make an attempt tonight at least to be specific about tax policies … And people are going to be excited about that and I think the overall intention here was to win the votes of those who are independent, those who might be wavering on the fence, and certainly those who are supporters of Hillary Clinton [who had also run for the nomination, before backing Obama].”

But Wilson also told Al Jazeera that he was disappointed Obama, who gave his acceptance speech before an exuberant crowd of 84,000 on the 45th anniversary of the “I have a dream” speech by Martin Luther King, the iconic US civil rights activist, had not specifically spoken about race.

“To mention the march on Washington and to not mention the fact that the majority of people there were African Americans, and they were there because they had racial grievances with America, and they want to bring this to the attention of the powers that be, and desire some change, I just found that unusual that that wasn’t mentioned,” he said.

But Obama did use his speech to highlight the lives of working class Americans, a group with whom Obama has been accused of being out of touch, as well as his own background, saying that he did not “fit the typical pedigree”.

US opinion polls show many voters are still unfamiliar with Obama and concerned about his readiness for the job. 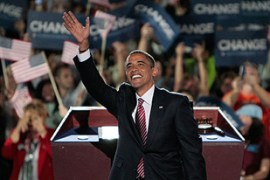 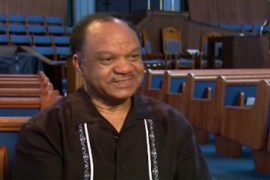 A colleague of Martin Luther King, Jr remembers the “I have a dream” speech. 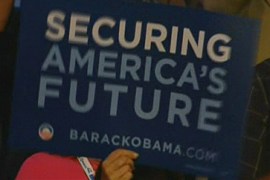 Will Barack Obama bring change to US foreign policy?