Amanda Lindhout, 26, is a freelance journalist who travelled to Somalia after working in Iraq for a news channel.

According to Canada’s CBC news website sources, the journalists were in a vehicle that was stopped by armed men as they went to see people displaced by Mogadishu’s violence in a refugee camp near Elasha, 18km south of the capital.

Gun-point abductions are common in the lawless Horn of Africa nation, where Islamic Courts Union (ICU) fighters have been fighting the interim government and its Ethiopian military allies since the start of last year.

The latest reported incident came a day after ICU fighters claimed they seized the strategic southern port of Kismayu from a pro-government fighter group in confrontations that killed at least 70 people.

The ICU controlled Mogadishu and much of the south for six months in 2006.

Engelbrecht said there also was fighting in Afmadow, about 110km northwest of Kismayu, during which 135 people have been wounded. 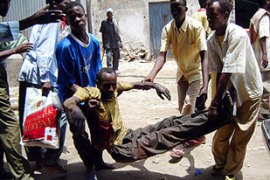 Armed opposition group is reported to have taken control of the port city of Kismayu.