“He was brought here [UN detention centre] by helicopter: two helicopters, one acting as an armed escort. They are taking no chances on security here,” he said.

“He is now in the detention centre where he will be undergoing preliminary inspection. He will then have charges read to him to make sure he understands them.”

Karadzic faces two charges of genocide for the 43-month siege of Sarajevo and the 1995 massacre of some 8,000 Muslims at Srebrenica, the worst atrocity in Europe since World War Two.

Arrested last week after 11 years on the run, Karadzic was until recently living under an assumed name as a bearded, long-haired alternative healer.

Serge Brammertz, the chief prosecutor, told reporters at The Hague that the arrest of Karadzic was “immensely important for the victims”.

“We had to wait far too long for this day. It is also very important for international justice; it clearly demonstrates that there is no alternative to the rest of war criminals,” he said.

He said the Serbian authorities deserved “full credit” for the apprehension of Karadzic, but added that without the arrest of Ratko Miladic and Goran Hadzic, who are still at large, the tribunal cannot complete its mandate.

It will take some months before the trial begins and the tribunal will determine the schedule, said Brammertz, adding that the prosecution would present the case in the “most efficient manner and produce sufficient evidence”, including eye witness reports.

A spokesperson for the international tribunal said: “I can confirm that after 13 years of evading justice, Radovan Karadzic has been transferred into the custody of the tribunal.

“He arrived into detention unit of the tribunal shortly before eight o’clock this morning. The tribunal will ensure his well being and the right to a fair trial as much as possible … in accordance with the highest international standard the procedure next will be for him to have his medical and other check ups set by the UN regulations of the UN detention unit.”

Speaking to Al Jazeera outside the UN detention centre at The Hague, Lorraine Smith, a representative of the International Bar Association, said: “It is a very big landmark for international criminal justice.”

“It is very significant because it sends a very clear message that persons who are indicted for serious crimes against humanity, genocide and war crimes will not escape conviction; will not escape justice,” she said.

Smith also said that extraditing Karadzic to The Hague would send a “very strong message to the vicitms of the crimes as well that even after 13 years, the possibility still exists that there will be a trial and that their voice will be very clearly heard”.

Earlier in Belgrade, Karadzic was escorted to the airport by masked officials from the Serbian secret service. A convoy of black jeeps took him from prison to the capital’s airport.

Al Jazeera’s Alan Fisher, reporting from the Serbian capital Belgrade, where Karadzic had been held before he was moved to The Hague, said there were angry demonstrations at a rally on Tuesday when protesters had running battles with the police.

About 10,000 people, many brought by bus from rural nationalist strongholds, showed their support for him in downtown Belgrade, chanting his name and holding up giant banners with his picture.

Some 45 people, most of them policemen, were wounded.

Karadzic’s delivery to The Hague is key to Serbia securing closer ties with the European Union and his arrest was seen as a clear pro-Western signal by the new government, sworn in earlier this month.

Sending him to The Hague is expected by the government to defuse tension and stop further protests, but also to unlock EU trade benefits.

Karadzic’s legal team had tried to delay his extradition by launching a cumbersome appeal procedure that threatened to drag on for several more days. But even they admitted they could only postpone, not stop his transfer.

Relatives have said Karadzic is in good spirits and preparing for his defence. He has had two suits delivered for his court appearance, one light, one dark. 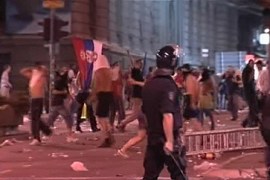 War crimes suspect Radovan Karadzic is at The Hague to face charges of genocide. 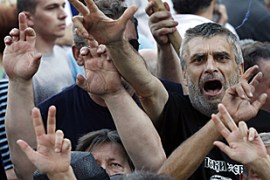