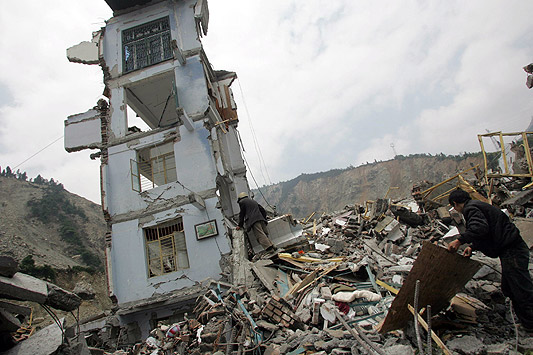 Government officials say they expect the death toll to rise above 50,000 [AFP]

China‘s president, Hu Jintao, has arrived in the earthquake-stricken province of Sichuan as authorities step up recovery efforts, accepting foreign help for the first time amid fears of a much higher body count.

The visit came as the Chinese state news agency reported that aftershocks had cut off roads and telecommunications in the region, burying vehicles.

The government says 20,000 are now confirmed to have died but the Earthquake and Disaster Relief Headquarters of the State Council, China‘s cabinet, said the toll was expected to rise above 50,000, state TV reported.

On Friday Hu flew into Mianyang, one of the worst-hit cities in Monday’s 7.9-magnitude earthquake, saying the relief operation had entered its “most crucial phase”.

He joins Wen Jiabao, the Chinese premier, who rushed to the disaster zone within hours of the earthquake late on Monday, meeting victims and rescue workers.

“We must make every effort, race against time and overcome all difficulties to achieve the final victory,” state-run Xinhua news agency quoted Hu as saying.

With recovery efforts entering their fourth day on Friday, specialised disaster relief teams from Japan, South Korea and Singapore will join the 130,000 Chinese military and police already in the region.

Hopes have been fading of finding any more survivors in the rubble, although on Friday one girl was pulled alive from the rubble of a collapsed school in the devastated town of Beichuan, Xinhua reported.

The agency said rescuers could hear more voices calling for help in the rubble and were “expecting more miracles”.

International aid for earthquake victims has reached more than $100m while funds collected from the Chinese public totals over $190m.

The government has also increased the sum allocated for earthquake relief to 5.4bn yuan ($772m), according to the central bank’s website, up from slightly over 1bn yuan ($159m) two days ago.

On Friday state media reported that Chinese troops and police had finally reached all 58 counties and townships severely damaged by the earthquake, believed to be China‘s worst in three decades.

Roads leading to the hardest-hit areas near the quake epicentre had been cut off by landslides or ripped apart by the power of the quake.

In the town of Yingxiu, where nearly one-third of the 20,000-strong population are believed to have died, more than 3,000 soldiers continued to look for survivors.

Al Jazeera correspondent Tony Cheng, reporting from the town, said virtually every building had been reduced to rubble.

He said that while soldiers had now reached the area, they lacked the heavy lifting equipment needed.

An estimated 8,000 are now believed to have died in the town – most still buried in the rubble.

China‘s health ministry issued a public advisory saying that saving lives was a priority but people should immediately clean and bury corpses to prevent a disease outbreak.

“Public sanitation and epidemic control and prevention should be thoroughly carried out” afterwards, it said in a notice posted on the ministry’s website.

Al Jazeera’s Melissa Chan, reporting from near the hard-hit town of Dujianyang, said that many quake survivors in the countryside felt they were being overlooked by relief efforts.

Food prices have soared since the quake hit, she said, and many families complain they are barely able to feed themselves.

Meanwhile in a separate development on Friday, Chinese authorities pledged an investigation into alleged poor building standards in the quake zone, saying any builders found to have cut corners to save money would be punished.

The move follows growing public anger over the number of school buildings that collapsed in the quake, while nearby buildings remained standing.

Reports have said close to 7,000 schools were destroyed across Sichuan province.

“If quality problems do exist in the school buildings, we will deal with the persons responsible strictly with no toleration and give the public a satisfying answer,” Han Jin, an education ministry official, was quoted by Xinhua.