The second Arab-Israeli war, also known as the Suez War, broke out on October 29, 1956 when Israel, Great Britain and France launched a joint attack against Egypt aimed at instituting a ‘regime change’ and deposing Gamal Abdel Nasser, the country’s charismatic leader.

But this significant war failed to achieve its goals and marked the decline of Britain’s colonial powers in the Middle East.

It also brought home the realities of Cold War politics.

Tensions first arose when Nasser struck an arms deal with Czechoslovakia – a move that worried Great Britain and the US who viewed it as a shift towards closer ties with the Soviet Union.

The World Bank, prodded by the US, retaliated by withdrawing a loan to Egypt for the building of the Aswan Dam. In the ongoing tit-for-tat, Nasser surprised the world by nationalising the Suez Canal, a vital waterway, and replacing the private Anglo-French company which ran it.

In 2006, Adel Ezzat, who worked closely with Nasser, recalled the moments leading up to the nationalisation decision.

“Only three of us were in the know,” Ezzat told AFP.

He had been working with Mohammed Yunes, Nasser‘s adviser on petroleum affairs.

“President Nasser had chosen us to carry out the nationalisation,” Ezzat said.

“On July 23, 1956, I met Nasser for the first time during the celebrations for the fourth anniversary of the revolution.

“The president whispered something in Yunes’ ear,” Ezzat recalls.

“Over the next 24 hours, Yunes seemed agitated and preoccupied.”

“The next day, he summoned me and my colleague Abdel Hamid Abu Bakr in his office and locked the door behind us, which I found very odd.

“‘The president has tasked me with nationalising the Suez Canal,'” he said.

“This decision had to remain top secret.” 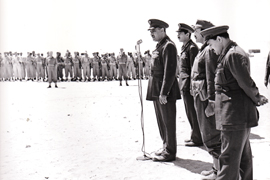 The three-man commando unit had 48 hours to plan the take-over based on little information.

Little did they know the move would not only spark a war with the West but also reshape Egypt‘s economy by regaining control of the most crucial chokepoint in world trade.

“All we had were a few publications on the canal given to Yunes by the president. We didn’t even have a mole in the Compagnie Universelle du Canal Maritime de Suez that ran the waterway,” Ezzat remembers.

The trio gathered a wider group of around 30, who were to break up into three groups tasked with overrunning the company’s offices in Port-Said, Suez and Ismailiya.

“We weren’t armed. Our instructions were to carry out the operation peacefully,” Ezzat told AFP.

Ezzat recalls that the signal for the operation’s launch was when Nasser, who was delivering a speech in Alexandria, pronounced the words “de Lesseps”, in reference to Ferdinand de Lesseps who founded the canal in 1869.

“Our mission was so secret that the drivers who took us from Cairo didn’t even know our destination. Except us three, the people who we were with didn’t know. They had only been told to bring a few clothes.”

The three groups were only informed of their respective assignments upon arriving at the Al-Galaa military base near Ismailiya on July 26, at around 4:00 in the afternoon.

“Some of them hesitated. They were afraid of the reaction of the British troops guarding the canal. But we refused to abandon our plan, history was on the march,” Ezzat says.

The three groups fanned out. They crept up to the Suez company’s offices but stayed out of sight, as they listened to Nasser‘s speech, their hearts throbbing with anxiety.

“The president said ‘de Lesseps’. Then he repeated it a second time, and a third, as if he feared we hadn’t heard him.”

Ezzat says the commandos went in at around 7:00 pm, found mostly empty offices and simply informed the guards that they had come to nationalise the Suez Canal. No blood was shed.

“The president then delievered his speech on the nationalisation. People poured into the streets and their support gave us more strength,” he recalls.

At that moment, Egypt regained control of the 19th century canal for whose construction an estimated 125,000 Egyptians perished in forced labour. 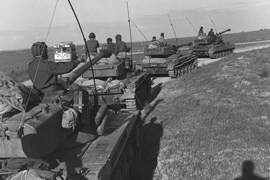 But Britain, as a former colonial occupier of the country, and France were determined to punish Nasser.

While Great Britain saw the conflict as a means to regain lost ground, Israel sought to invade Egypt for economic and strategic interests.

Paris on the other hand, had been angered by Nasser’s support of the Algerian rebellion against French colonisers.

On October 29, Israel initiated the hostilities when it invaded Gaza and the Sinai, then, on October 30, moved to the Suez Canal zone.

Outraged that the US was not informed of the secret attack plan and fearful that the Soviet Union – which had close ties with Egypt – would be drawn into the conflict, Dwight Eisenhower, then US President, sponsored a UN resolution denouncing the attack.

It was passed on November 2. While the ultimatum to Israel and Egypt had been ignored as expected, British and French troops were busy trying to take control of the canal zone.

On November 6, 1956, the US threatened to cancel vital loans to its European allies and a few days later hostilities ended.

A ceasefire came into effect and a UN emergency force was stationed in the area; the Suez was returned to Egypt.

While Nasser lost the war in military terms, he gained politically. The conflict marked the dramatic end of British and French influence in the region, and left the US poised to become the most influential power in the region.