But UN sources said Gambari failed to meet Senior General Than Shwe or his deputy.
He looks forward to meeting Senior General Than Shwe, chairman of the State Peace and Development Council, before the conclusion of his mission,” a UN statement said on Sunday.
A security official said Gambari met Suu Kyi on returning to Yangon.
“They held a meeting of about one hour and 15 minutes,” the source said.

“There must be a result from this visit,” said Razali Ismail, a Malaysian diplomat and Gambari’s predecessor as UN special envoy.

“[Gambari] must get a promise from the military that they will not shoot the people who express their views [on the streets]. We cannot let the people down,” he said.

Bo Hla Tint, a former politician, told Al Jazeera that people in Myanmar expect the UN to find a solution to the crisis.

“People are expecting Gambari to stay as long as it takes to get tangible results,” he said.

Four days of massive security operations have left at least 13 people dead and hundreds arrested, after the military government cracked down on weeks of protests that had escalated into the biggest challenge to their rule in 20 years.

The protests first erupted last month after a massive increase in fuel prices, but really took off two weeks ago with the emergence of the Buddhist monks on the front line and drew up to 100,000 people onto the streets last week.

A Japanese envoy has also left for Myanmar on Sunday to urge the military government to thoroughly investigate the killing of a Japanese journalist during an anti-government rally and not to use force to end the protests.

Video journalist Kenji Nagai, 50, was fatally wounded in Yangon on Thursday, apparently shot by a soldier firing at point-blank range.

“One [purpose] is to make sure there is a full investigation into the dreadful incident and to ensure the safety of Japanese nationals,” Mitoji Yabunaka, deputy foreign minister, told reporters at Narita airport.

While the international community exerted diplomatic pressure, Myanmar’s military government continued to tighten its hold over the streets.

Andrew Kirkwood of the Save The Children told Al Jazeera that the government seemed to be in control of Yangon on Sunday.

“But there is an atmosphere of high tension here,” he said.

Two gatherings of a few hundred protesters each emerged at locations in Yangon on Saturday, but security forces quickly swooped with  batons and beat them away.

Demonstrations led by monks are being tolerated elsewhere, including the religious capital of Mandalay, but supporters who attach themselves are being generally dispersed.

However in the central city of Pakokku, witnesses said monks led  thousands of protesters in a peaceful two-hour march on Saturday that  appeared to have been mounted with the approval of local authorities.

Dissidents said on Sunday they were looking for alternative venues to gather, away from the thousands of security forces massed in Yangon.

“We plan to go ahead with our movement,” a source involved in the protests said.

Troops have blockaded many big monasteries, including in Mandalay, and monks are only allowed to move around in small  groups.

Meanwhile, Myanmar‘s main internet connection has been cut since  Friday, drastically reducing the flow of video, photos and  first-hand reports of the violence which have helped inform the world of the crisis. 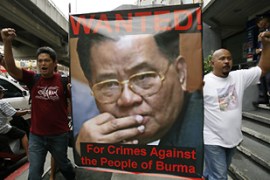 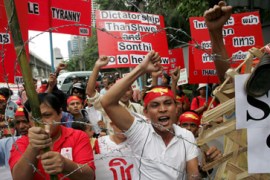