“This means we will not support the monarchy any more,” Poudel, who is also peace and reconstruction minister, said.
Sushil Koirala, acting president of Nepali Congress, said the decision came a week after the Maoists withdrew from the ruling coalition after they demanded the monarchy be abolished.
The Maoists waged a decade-long armed rebellion to turn Nepal into a republic before joining the government this year.
Nepali Congress leaders said they hoped the move would pave the way for the Maoists to return to the political mainstream in time for the November vote to elect a special assembly to draft a new constitution.
The Maoists have signalled they would be open to reconciliation.

King Gyanendra has been unpopular since he came to the throne in 2001 after a massacre in the royal palace left his brother, King Birendra, and nine other royals dead.

Gyanendra seized absolute power in 2005, saying he would bring order to a chaotic political scene and quell the Maoist insurgency that had killed nearly 13,000 people.

But the political and economic climate worsened, and widespread discontent led to nearly a month of protests across the country that ultimately forced Gyanendra to end his royal dictatorship. The king currently holds no real power.

The government has meanwhile nationalised 12 royal palaces. A government committee has also been trying to catalogue the king’s property and assets – which are said to be substantial and well-hidden. 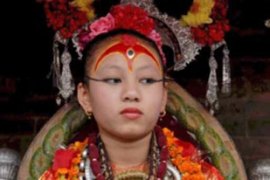 Officials say monarch is likely to break with tradition and not attend festival. 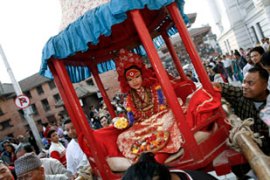