Mauritius was found to have the best overall record and was followed by the Seychelles, Botswana, Cape Verde and South Africa.

In individual categories Gabon was deemed the safest and most secure country, Botswana the most transparent, while the Seychelles was found to have the most sustainable economy and best record on human development.
The study, compiled by governance experts at Harvard University, analysed the countries’ performances periodically between 2000-2005.
The best-performing nations are all characterised by stable governments over a period of time.
Likewise several countries emerging from brutal internal conflicts were found to have made the greatest strides towards stable and efficient governance.
Rwanda was torn-apart by state-sponsored genocide in 1994 which left an estimated 800,000 people dead but according to the governance index it has made the largest improvements since 2000, ranking 18th overall.
Similarly Angola, which is still emerging from the legacy of a 27-year civil war that ended in 2002, was ranked second-most improved in the five categories.
Consistently poor

Sierra Leone, which has just carried out its first transfer of presidential power between parties since the end of a brutal decade-long conflict, was also high on the list as was Burundi, which was mired in ethnic conflict between Hutus and Tutsis until 2001.

Guinea-Bissau was once hailed as a potential African success story but was found by the study to have deteriorated the most out of the 48 countries in terms of good governance.
The index also demonstrates that “a set of countries have consistently been governed poorly relative to the rest of the continent”.
Top of that list is Somalia which has been without an effective functioning central government since 1991.
The Democratic Republic of Congo, where fighting has recently forced thousands of civilians to flee in the country’s east, has also consistently ranked as one of the worst-governed nations.
“Several of these worst performing countries highlight the long-running effects of conflict, suggesting the difficulties of rapidly improving political good performance even with improved governmental institutions,” the report said.
Sudan was found to be the most unsafe place in sub-Saharan Africa and although South Africa was deemed one of the best governed it is also the third most dangerous.
Leadership prize

Zimbabwe, experiencing a political crisis that has led to a police crackdown and an economic meltdown, is 31st on the list.

Mo Ibrahim, the founder of Celtel – the largest mobile phone provider in sub-Saharan Africa – set up the index in conjunction with experts at the Kennedy School of Government at Harvard.
His foundation was established as an African-based project to recognise good leaders – and name and shame the poorly performing governments.
It has the backing of Nelson Mandela and Kofi Annan, among others.
“We are shining a light on governance in Africa, and in so doing we are making a unique contribution to improving the quality of governance,” he said.
The first annual Mo Ibrahim Prize for Achievement in African Leadership will be awarded on October 22.
A former head of state or government will receive a $5 million prize split over 10 years with $200,000 annually for the rest of their lives.
A further $200,000 a year will be made available for good causes chosen by the winning former leader.
Source: Al Jazeera, News Agencies 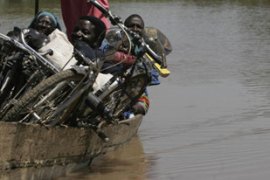 Hundreds of thousands of people are desperate for food and shelter.