The expectation on Shinzo Abe was huge from the day he took over the job as Japanese prime minister.

The grandson of a former prime minister, he appeared anointed for the job.

But after just short of a year in power, his premiership has been tarred with a string of damaging scandals and a humiliating electoral defeat.

Just a few days before he finally decided to stand down he threatened to quit unless he got his way with Japan‘s ongoing military commitments to Afghanistan.

Abe had been pushing to extend Japan‘s refuelling mission in the Indian Ocean in support of the US-led operation in Afghanistan.

“In order to achieve the continuation of the Japanese Self Defence Forces’ refuelling mission there is very much work to be done,” he said.

“I must gain the agreement of the opposition, starting with the Democratic Party.  And I will lay my job on the line to do this.”

The mission was all part of his big plan to expand Japan‘s defence force beyond its current peacekeeping role.

He recently upgraded Japan‘s Defence Agency to a full ministry, the first time it has had such a status since World War Two.

Abe’s defence headaches though were just the tip of the iceberg.

He was pummelled in July elections, seeing his Liberal Democratic Party lose control of the upper house of parliament.

On top of that his cabinet has been plagued by scandal and corruption allegations with the Agriculture portfolio particularly disastrous.

The second quit after he was accused of fudging his office expenses.

Amid the comings and goings it was clear the prime minister was fighting for his political life.

Even his wife was honest – some might argue too honest – about the challenges he faced.

In July she was quoted in the Financial Times as saying that her husband “felt he lacked the preparation to be prime minister.”

But while desperately unpopular at home, Abe has made some key foreign policy gains.

The most notable came with China – with Abe making Beijing his first overseas port of call after he took office.

In April this year he hosted Hu Jiantao, the Chinese premier, for what he described as an “ice-melting visit”.

Also helping to thaw the often chilly relations with Beijing and other Asian neighbours was his decision to stay away from Tokyo‘s controversial Yasakuni shrine, dedicated to Japan‘s war dead.

Now with Abe departing the scene, all eyes inside and outside of Japan will be waiting to see who takes the helm of the world’s second largest economy. 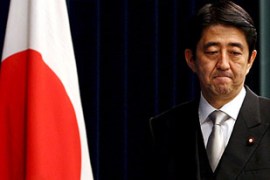