“This is not regarded as an incompetent government,” he said. “I don’t regard it as a perfect government as I certainly don’t regard myself as being without failings as a prime minister. I’ve made my share of mistakes. But we are regarded as competent.”

Howard’s plummeting popularity had led to speculation that senior ministers in his government are now urging him to resign ahead of the election, replacing him with the Peter Costello, the current finance minister.

Speaking to ABC, Howard denied that his party and cabinet colleagues were moving against him fearing a crushing defeat.

“I don’t think many of them are panicking. What I would say to my colleagues is: we can win this election,” he said.

On Sunday several senior ministers also denied suggestions of plans to oust Howard ahead of the election.

“That is definitely not the case,” Alexander Downer, the Australian foreign minister, told Network Ten.

“There is enormous affection for and respect for John Howard.”

Meanwhile Mark Vaile, Howard’s deputy and leader of the National Party, said the prime minister had shown during the Apec gathering that “he is a very, very capable statesman on the world stage – highly respected and highly regarded – a great asset for Australia and all Australians.”

Those views have though not been borne out by recent opinion polls.

According to a poll published in the Sydney Morning Herald on Monday, Labour had a strong 57 to 43 percent lead over Howard’s ruling Liberal-National coalition.

In the same poll Kevin Rudd, the Labour leader, saw his personal approval rating up eight points to 67 per cent, according to the poll, while Howard’s remained steady at 50 per cent.

Rudd was seen by many analysts as having gained a certain bounce from the Apec summit – appearing at ease meeting global leaders and speaking in fluent Mandarin with Hu Jintao, the Chinese president.

One of the Howard government’s main attacks on Rudd’s suitability for office has been his purported lack of experience for the job.

During the Apec gathering Rudd held talks with Bush and outlined his plans for a phased withdrawal of Australian troops from Iraq if he takes power.

No date has yet been set for Australia‘s general election, although Howard must call it to take place before January 19 next year. 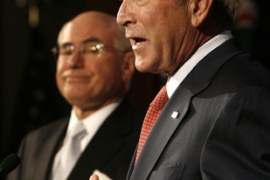