Just before leaving for the US, Karzai admitted the US and its allies had got nowhere in the hunt for bin Laden.
“We are not closer, we are not further away from it,” said. “We are where we were a few years ago.”
He also said bin Laden was not in Afghanistan.
Analysts believe he is living in the tribal border region between Pakistan and Afghanistan.
Civilian deaths

Critics say he has failed as president to address the increasing civilian deaths caused by foreign forces and a decrease in security across the country.
Ahmed Shah Ahmedzai, a former prime minister turned political analyst, said about 90 per cent of Afghans have lost faith in their president and are unhappy.
Criticism
But it is not just citizens who are disillusioned with Karzai’s leadership.
Senior Nato sources told Al Jazeera that they too are disappointed with his performance, saying he has failed to provide good governance and stamp out corruption.
Pro-Karzai politicians, such as Khalid Pashtoon, admit corruption and security are still huge problems, but say the president does not deserve all of the blame.
He said: “He may not be the best president but, so far, we have no other alternative and President Karzai did a lot of good things for the country.”
Pashtoon said after 30 years of war, bringing together a divided nation was a difficult task, especially while trying to appease the international community at the same time.
“President Karzai is not the type of president that he decides everything.
Now Afghanistan is almost handled by the whole world,” he said.
Source: Al Jazeera, News Agencies 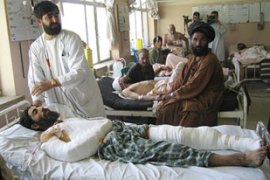