“A single bomb was dropped and it is believed the explosion killed all three soldiers who were declared dead at the scene”.
The ministry said the troops from the 1st Battalion The Royal Anglian Regiment were involved in a “fighting patrol” that was targeting Taliban fighters northwest of Kajaki in Helmand province.
The military did not identify the soldiers but said next of kin had been informed and said the incident would be investigated.
Earlier this year, Des Browne, the UK defence secretary, said that since 1990, 12 British personnel had died in friendly-fire incidents involving US forces in Iraq, but that no such incidents had taken place in Afghanistan.
Source : News Agencies 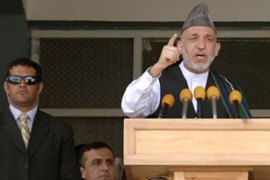 Parade and display of national costumes mark the British defeat in 1919.