At least 50 people have been injured in Bangladesh as a violent student protest, that began at Dhaka University, spread across the capital and the country.

The clashes with police continued on Wednesday despite an apology from the interim government and the closure of an army camp at the university gymnasium, one of the sutdent demands.

In the capital, students from half a dozen colleges and universities took to the streets in support of their colleagues at the Dhaka campus, the largest in the country who boycotted lectures for the third consecutive day.

At least six vehicles were burned and similar clashes with police were reported in the northwestern town of Rajshahi, the southern coastal town of Barisal and several other places.

At least 50 people were injured in the fighting at Rajshahi university and at a college in Khulna city in the southwest, witnesses said.

“The situation is deteriorating as teachers now have came out to join protesting students,” said a police officer in Dhaka.

The violence has shut shops, forced public transport off the streets and caused panic among residents in affected areas, witnesses said.

The Bangladeshi army had begun to withdraw troops from the camp at the Dhaka University gymnasium after fighting on Tuesday left at least 150 students injured.

The government issued an apology over the incident and confirmed the troop withdrawal had begun late on Tuesday. Students, fed up with the army presence, had begun rioting on Monday. 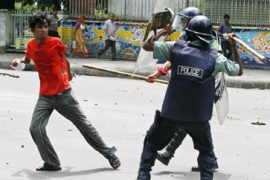