Meanwhile police have detained the construction manager and project supervisor from state-owned Hunan Road and Bridge Construction Co, the official Xinhua news agency said.
More than 120 workers were removing steel scaffolding when all four arches of the bridge in Fenghuang, Hunan province, collapsed.
Nong Xiaozhong, one of two survivors in a 12-man construction team working under the bridge, said he and his colleagues had worried that the bridge’s arches were too large and that the mortar was not dry enough to remove the scaffolding.
Rescuers managed to save 86 people, including 22 who were injured – five critically.
“They are generally very scared. Some are unconscious, and others who can talk are very tense,” a doctor was quoted as saying.
The bridge, over the Tuojiang river and part of a national highway, had been scheduled to open to traffic at the end of the month.
Quality concerns

Monday’s collapse is likely to fuel concerns about shoddy quality amid China’s rapid economic expansion, particularly as the country struggles to repair its reputation after a series of bans and recalls affecting China-made products across the world.

The government warned builders nationwide to learn from the disaster, Xinhua said.
The official China Daily described the collapse as “a bloody lesson” and said “human factors might loom large behind the sorry scene”.
“[It] should also prompt a sweeping check of the safety procedures in place at all current bridge construction projects,” the paper said.
Workplace accidents are rife in China’s booming economy, where safety rules are often overlooked and contractors cut corners resulting in thousands of deaths every year in the country’s coal mines, factories and building sites.
On Wednesday more than 1,500 rescue workers were searching for those still missing and a team from the Chinese Centres for Disease Control was at the scene spraying disinfectant to prevent disease from dead bodies spreading into the river.
Residents living in Fenghuang’s riverside stilt houses commonly wash laundry and dishes in the Tuojiang river.
Source : News Agencies 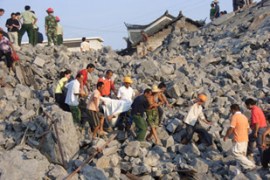 Many dead in China bridge collapse

Disaster comes amid media reports that thousands of bridges could be unsafe.